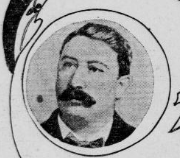 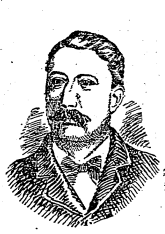 Schaffer, then Chief of Police1Schaffer became Chief of Police in 1892. He is said to have visited the department several times to get tips from the outgoing administration. The San Francisco Chronicle reported that he would be going out to catch thieves himself and that he shook up the department to make it more to his liking.4

In 1895, Schaffer had 50 policemen in his department. He felt he needed at least 10 more to adequately cover the ever-growing boundaries of Oakland and was planning on asking (and receiving) for the money to do this for the next fiscal year.12

However, before he could get those policemen, the Board of Public Works voted to remove Schaffer as the Chief of Police in 1895. They replaced him with Charles Lloyd over the objections of Mayor John Davie. Schaffer did not exactly go gracefully; he planned to deliver the following letter upon Lloyd's arrival: "Mr. C.E. Lloyd- Dear Sir: I cannot consistently see my way clear to deliver the office to you, as I am convinced that your appointment and my removal by the Board of Police and Fire Commissioners were illegal. Yours, etc., Louis Schaffer, Chief of Police." He backed up his claim to the office with 3 recent amendments to the City Charter which had been adopted apparently with the express intention of keeping the department out of politics. Section 155 stated that employees of OPD and OFD would be appointed but would not be appointed or removed for political reasons and would only happen for cause. Section 200 said that each officer would hold office through term. Section 207 said that competent and experienced employees should not be removed unnecessarily.  Because Schaffer's second term began on November 13th, 1894, he should have remained in office until November 13th, 1896.3 Although the exact details of the reasons for his removal are unclear, in 1894, while Schaffer was running (unsuccessfully) for Alameda County Sheriff, the "Christian Endeavor" group for prohibition published a letter against his election that spoke in scathing terms about his performance as chief. They stated that he was friends with all of the enemies of good government and that 240 of 250 owners of bars and gambling dens supported his election.10

It appears that the Chief before Schaffer, John Tompkins, was also removed before his term was up but chose to "gracefully retire." Schaffer may have forgotten about this precedent.

Just a few months later Lloyd brought Schaffer before the Grand Jury on the charge of accepting bribes to keep a Chinese lottery operating.8

While on Council, Schaffer was considered a leader.6 On the other hand, he almost came to blows with Superintendent of Streets Miller when Miller did not give some people from his district jobs.7 He was President of Council in 1902.

In 1906 Schaffer spent an hour in jail. He was arrested for violating an ordinance that prohibited vehicles on the sidewalk. Apparently he planned to next test the ordinance requiring all vehicles not attached to animals to be housed at night.9

Schaffer's uncle was a well-known butcher, also named Louis Schaffer. The man died while sitting upright in his buggy.2