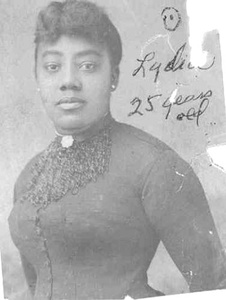 Lydia Flood Jackson c. 1887
photo from BlackPast.orgLydia Flood Jackson (June 9, 1862 – July 8, 1963) was the daughter of Elizabeth Flood and was born in Brooklyn (now part of Oakland) in 1862. In 1872, she became the first African American child to attend the newly integrated John Swett School in Oakland.

In part because of the efforts of her parents, the black schools were closed in 1875 and integrated schools became the law in California in 1880. Lydia went on to become a champion of women's rights. Lydia Flood (Jackson) spoke at the 1918 state women's convention in favor of suffrage.

Amazingly, she was present at the 80th anniversary of the First African Methodist Episcopal church, a church her parents had helped found in 1858 (then Shiloh AME).

When she died at 101, she was the oldest native of Oakland. 2 She was buried in Mountain View Cemetery.