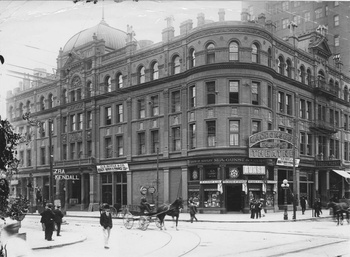 The MacDonough Theatre, the storefront of M. A. Gunst & Company's House of Staples, the office of O. E. Hotle & Company, and the Realty, Bonds and Finance Company (1911) 1

Opening on November 14, 1892, the MacDonough Theatre was designed by architects Mooser & Cuthbertson 5 of San Francisco as a playhouse. Located at 1320 Broadway, the theatre was the go-to spot in Oakland for many years. The building was also later known as the Henshaw Building.

In 1891, there was much speculation as to whether Joseph MacDonough would build a theater in Oakland. MacDonough owned the two lots, and Oakland had no proper theaters at that point, 3 the Oakland Theatre being compared with a barn. People were interested enough that MacDonough was offered a $10,000 bonus, which the Oakland Tribune and Oakland Times helped raise in a matter of days. 4

Finally, in March, 1892, with great fanfare, the cornerstone was laid and construction commenced. The entrance was to have blue sandstone columns and white marble steps, and a mosaic pattern on the floor of the foyer. The theater had "McVicker" chairs made by Andrews and Company, of Chicago, finished in "maroon plush", with steel spring cushions in the seat and back. 4

Experienced theater manager George F. Mothersole was the lessee of the theater space at $500 per month. 2

The Fox State Theatre finally closed in 1945 and the building was demolished in 1956, making way for an office and bank building. 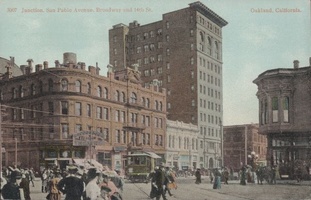 Colorized photo of MacDonough Theatre, between 1907 and 1915 via Museum of Performance and Design, Performing Arts Library, public domain 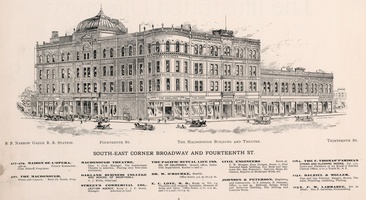 from 1896 Illustrated Directory of Oakland