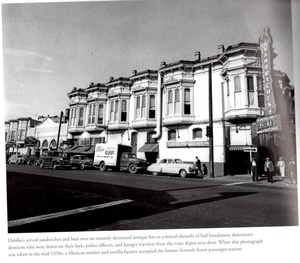 Mi Rancho Market in the background in the 1950's 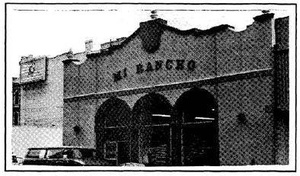 Mi Rancho was a Mexican Grocery store Opened in the mid 1930's by a Mexican Family who's last name was Cobian the First Owner was a woman her name was Consuelo Cobian.  The first location was on 7th st near Broadway roughly were the Oakland Police headquarters is today in 1939 they Moved across the street into the former Central pacific Railroad depot which before that was being Used as the Southern Pacific IER red train stop. In the 1930's a growing Mexican and Latino population lived in the area and in nearby West Oakland this according to some historian and older residents was the very First Mexican Grocery store in Oakland that opened up to cater to the Mexican Latino Community of the time who lacked proper stores that sold products from Latin America.

1954 Mi Rancho was sold to Robert Berber and expanded to selling Fresh Mexican food and expanded as a Tortilla Factory. Mi Rancho Grocery store continued to serve as a Grocery store until 1999 when it closed and is now only doing Tortilla productions now there a Tortilla factory based in San Leandro. But Mi Rancho played an important part in the early history of the Mexican Community in West Oakland as it was the first Mexican Grocery store in Oakland. 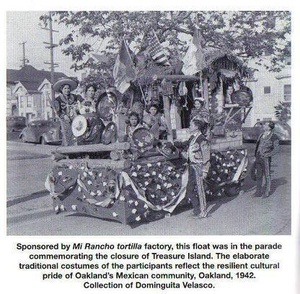 This was a float sponsored by Mi Rancho for a parade for the Closing of Treasure island Fair.

based in Oakland, at least at one point!

http://www.miranchoretail.com/our_company.html - used to be based in the Central Pacific Railroad Depot (later a Southern Pacific station)

so not the market- this is the tortillas.

Why not the market?  It operated as a market in the CP/SP building until at least the mid-90s.

it looks like they're two separate things- miranchoretail (see link above) claims to have been in that building. http://www.miranchosupermarket.com/about_us.html is a market founded in 1994.