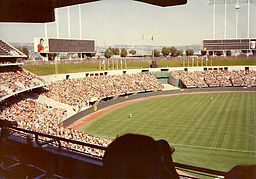 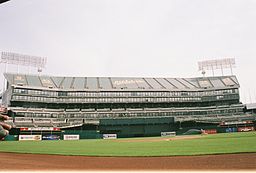 The Coliseum Outfield after Mount Davis by By Bspangenberg (Own work) [GFDL (http://www.gnu.org/copyleft/fdl.html) or CC-BY-3.0 (http://creativecommons.org/licenses/by/3.0)], via Wikimedia Commons

Mount Davis is the giant set of seats in the outfield of O.Co, constructed in 1996.

No one thinks that the Coliseum is a good baseball field. It's never been a good baseball field. But what really sunk it? Mount Davis. Before Mount Davis, there was a view of the Oakland Hills. There were good ole fashioned bleachers. The stadium often felt full even when it wasn't, because there was no monstrous tarped off beast behind the outfield.

So what happened? Al Davis happened. See, before the Raiders came to Oakland before the A's did. The Raiders arrived in 1966 (first game on September 16th) and the A's didn't play their first game there until after the 1967 season (April 17, 1968). Dual stadiums aren't great- ask A's fans about the jacked up field once football season starts- but it was tolerable, especially after Al Davis took his Raiders to Los Angeles. They were gone from 1981-1995.1

Then Al Davis, who is kind of like the modern day Horace Carpentier, if you ask most A's fans, wanted to come back to Oakland, and Oakland was apparently willing to give him whatever he wanted. More luxury seats? Sure! More seats? Sure! So no one had really liked the stadium or sharing the stadium to begin with- no big thing. Davis WOULD get his way and the Raiders WOULD be back. According to Wikipedia, the deal was sweetened even further: the Raiders pay only $525,000 a year in rent (the 49ers pay way more) — and do not pay maintenance or game-day operating costs.3 A New York Times article at the time said that the Oakland-Alameda County Coliseum Board (now the Joint Powers Authority, I believe) unanimously approved a 16-year lease $31.9 million loan that included "relocation and operating expenses." (I know where I'm going next time I want help covering moving costs!) The City Council had to vote on a $70 million bond issue for the renovations. All kinds of tricky TV deals had to be renegotiated.4 (Football has fancy rules about sell-outs vs blackouts.)

So what is REALLY in Mount Davis, a four-tier concrete behemoth? Twenty-two thousand seats, the "East" and "West" clubs which are each 40,000 square feet, a 9,000 square foot kitchen, and two matrix scoreboards in the end-zones. The cost? Over $200 million. (It was supposed to come in at $100 million).2

And what of all of those seats? Well, they're covered during every single baseball game, and who would want to sit in those shit seats anyway? Oh, WAIT! maybe some of the people who couldn't get tickets to the playoffs would like to sit there, or in the third deck that was also tarped off by A's owner (and probable relative of Carpentier and Davis) Lew Wolff. And as of February 2013, some of the third deck will be tarped off during Raiders games, too, in order to play numbers games with those blackout/sellout rules.5 (This begs the question: Wolff's excuse during the playoffs about removing the tarps was cost. If it's so expensive, how much more expensive will it be to remove the A's green tarps and replace them with Raiders black during the overlapping portions of the season? Who's covering this cost?)

And so, though Al Davis passed away in 2011, his legacy remains, at least until we get a new ballpark.