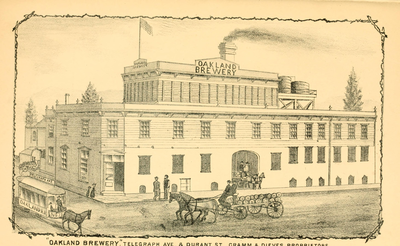 Telegraph location from Oakland and Surroundings

The Oakland Brewery began in 1852 as a modest establishment owned and operated by two German immigrants [What were their names?]. Located on the northeast corner of Broadway and 9th Street, the brewery produced 150 barrels of lager beer during the first year of operations.

Oakland Brewery went through a number of owners over the years.  In 1855 the brewery was purchased by J. C. William who enlarged the plant. The next owner was Joseph Becht, and although the brewery was destroyed in an 1863 fire, Becht rebuilt the plant at the same location.  In 1867 Becht sold the brewery to Lawrence Knauer and his son Fred Knauer.  Just two years later the Knauers partnered with E. Mangle, John Bose, and Charles Kramm.

The strength of the new partnership immediately lead to the construction of a much larger plant located in a three story brick and frame building at Durant Street (now 19th Street) and Telegraph Avenue. With the expanded operations Oakland Brewery produced 10,000 barrels of beer annually.

Following the death of John Bose and with the retirement of E. Mangle, Joseph P. Dieves bought an interest in the company.

The Oakland Brewery was the leader throughout Alameda County until new breweries of the 1870's and 1880's challenged its market dominance. 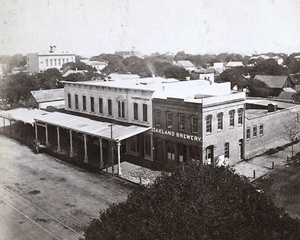