Describe Oakland Expositions here [How many were there?  What years were they?  Where were the Expos held? Why did the Expos stop/end?]

It appears that the Oakland Expositions long predate the Oakland Exposition Building (auto races, horse and dog shows are among the events which took place at the Exposition Building).  Check out the current site of Laney College on the 1936-1967 maps at Old Oakland, and you'll see where the building used to be located.  It apparently opened in early 1932, after construction that began in late 1931. 8-30-31 Tribune.pdf

“In November, 1895, eight men – J. W. Nelson, George Roeth, M. J. Keller, Chas. D. Booth, Fred Becker, Theo Gils, E. G. Baswell, and F. W. Spiars – as the result of a desire originating with a few public-spirited men, were chosen as an Executive Committee to arrange for and conduct an exposition, designed to make prominent the manufactures and products of Alameda County.  Without a dollar in their treasury, and with a probability of coming out of the enterprise in debt, these men undertook the task.  They rented the Mills Tabernacle, which has a seating capacity of 3,500 people, built an annex 83’ x 100’ square, filled the two buildings with exhibits, arranged for a series of evening entertainments of a high order, and invited the public to the entertainment thus provided.  And the public came, with the result that at the close of the two weeks during which the exposition continued, beginning with December 16, the committee found itself with about $1,700 in the treasury, and all its bills paid, including the cost of the annex – $,125.”

“The following summer the second Exposition was given, in the buildings previously occupied, beginning August 3, and continuing for three week, with Craigie Sharp as superintendent, C. E. Evans assistant superintendent, and and W. W. Moody assistant secretary.  With some slight changes the working committees were practically the same as those of the year before, but the musical entertainment was put in charge of Mr. Alex Stewart.  Additional space for exhibits was provided, the entire block of land, 200’ x 300’ (with the exception of a small space in one corner), being utilized.  In point of attendance and every other respect, the second exposition far exceeded that of 1895.  At the election held in January last, the same board of officers was elected, with the exception that Theo. Gier was elected vice-president, Mr. Keller declining a reelection.” 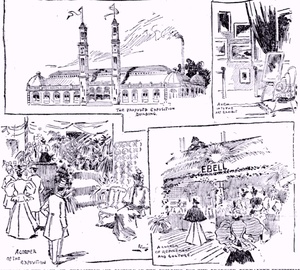