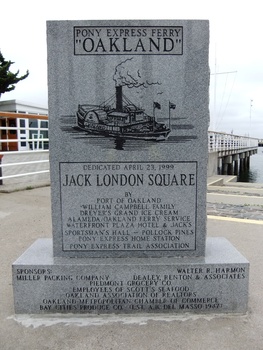 The Pony Express was a mail service delivering messages, newspapers, and mail using relays of horse-mounted riders that operated from April 3, 1860, to October 24, 1861. 1

Normally the mail was sent via steamer from Sacramento down the Sacramento River to San Francisco. When the steamer was missed, riders took the mail via horseback to Oakland. The Pony Express Ferry "Oakland" Marker was dedicated on April 23, 1999 in Jack London Square at the transfer point of the Pony Express route between Oakland and San Francisco.

The overland route between Sacramento and Oakland, generally followed Interstates 80 and 680 between Sacramento and Benicia. The route passed through what is now the campus of the University of California, Davis, by the site of the abandoned Village of Silvey, through Vacaville, Fairfield, Rockville, Cordellia, and Benicia. After crossing by ferry from Benicia to Martinez, the route followed what is now Pacheco Boulevard, Contra Costa Boulevard by Sun Valley Shopping Center, North Main Street through Walnut Creek, Mount Diablo Boulevard through Lafayette, and over Fish Ranch Road to Oakland, down Telegraph Avenue ending at Jack London Square. 2