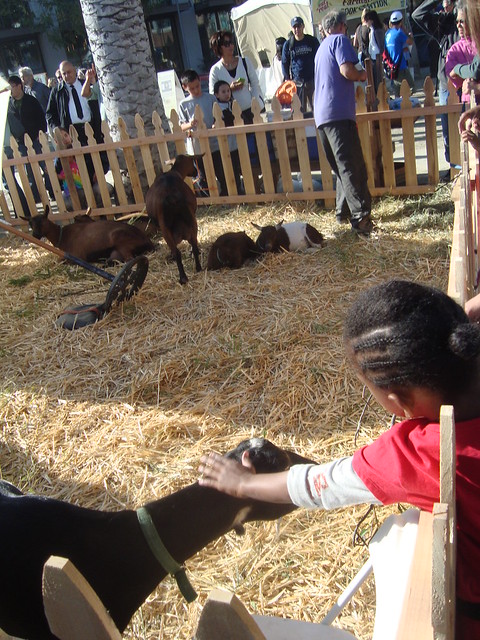 At the Eat Real Festival in Jack London Square (source)

Jack London Square was (and is) home to a wholesale produce market which first started at 11th and Washington but got pushed lower to Franklin between 1st and 4th streets.

In 1877, Warren Rouse opened a produce business near 11th and Washington and by 1903 when a fire destroyed the Bacon Building, there were several other grocers there with him. When they rebuilt, they moved South a few blocks to 11th between Webster and Harrison. It appears that they moved into a block owned by the wife of Borax Smith called the "Produce Exchange" that included 46 stores. (The "Exchange" didn't make it.)

In 1916, City Council limited the area where produce could be displayed on sidewalks to the area between Broadway, Fallon, 7th and the waterfront. Between 1916-1917 the produce sellers incorporated the Fruit and Produce Realty companied, purchased 38 lots along Franklin between 1st and 4th and built market buildings designed by architect Charles McCall. This allowed them to be closer to both the waterfront and the railway station.  These produce men were primarily Italians. One business, Western Produce, was owned by a Chinese man.

McCall's buildings are among the best surviving examples of this kind of produce market in the US. 1

The area between Broadway, Webster, First Street (Embarcadero) and the estuary was named Jack London Square in 1951. 2 The Port of Oakland announced the decision in 1950, and on May 1, 1951, the area was formally dedicated and a plaque placed at the foot of Broadway. 3 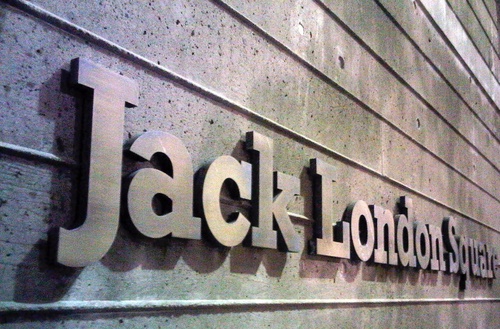