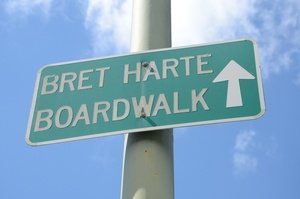 The Bret Harte Boardwalk is a stretch of historic buildings on 5th Street, near where the writer Bret Harte lived as young man in 1854. The house where he lived is no longer standing. Harte's stepfather, Colonel Andrew Williams, became Oakland's 4th mayor in 1857.