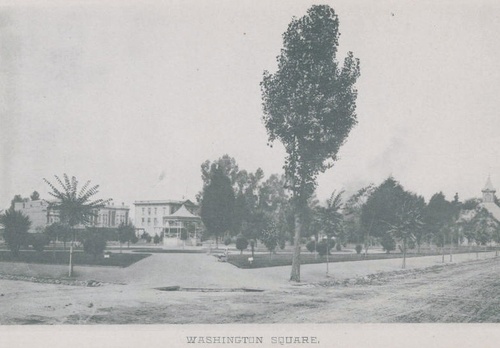 When the City of Oakland was originally laid out, Kellersberger's map showed Washington Square occupying the block bounded by Broadway and 5th, Washington and 4th Streets, immediately across from Franklin Square.  When Oakland became the county seat for Alameda County in 1874 at the urging of then-mayor Nathaniel Spaulding, Washington Square was given to the County as the site for the Alameda County courthouse. Legal cases in 1904 2 and 1933 3 confirmed that the City was entitled to consider itself the owner of the land in 1874, even though the property had never been deeded to the City, based on the fact that the square was laid out on Kellersberger's map.

The site is still used for County offices, although the courthouse is now located near Lake Merritt.

Numerous references from the 1870s-1890s note that there was also a Washington Square in East Oakland, located on East 14th Street between Sixth and Seventh Avenues. The East Oakland square was the site of a tennis club and flagpole.