In 1922 the city of Oakland was far below average size of public recreation grounds per the national average. The ideal acreage of parks in a modern city should be one acre of park land for every hundred residents.  Oakland at that time only had 258 acres of parks,  where it should have at least 2160, according to the population.

Sequoia "Mountain" Park was proposed as an ideal way to remedy the situation. The  proposed park was about 1500 acres  The plan of the Parks board was put a $538 000 "Sequoia Mountain Park" bond before the voters on August 29th of 1922.   "Save Oakland Sequoias" Committee was formed to get citizens of Oakland interested in the proposed park.  They held special events for the public to see the proposed park.

"Get acquainted with the redwoods and the beauty of the proposed park, then vote YES on the bond issue, August 29" was the slogan.

The bond did not pass according the August 21, 1922 Oakland Tribune which stated

In March of 1925 it is reported that the "Oakland Municipal Zoo" as it was called then was to  be moved from its present location at 19th and Alice Streets (Harrison???) during the summer. Only, if the city council passed a $20,000 item in the park boards appropriations for 1925-26 budget, to cover the cost of the move.

The new location will be the "Sequoia Mountain Park"according to Edgar M. Sanborn vice-president of the park board. They tired to do this the previous year,  it was not approved by the council.   After that, there were many complaints from residents of the 19th & Alice neighborhood  that  collection of animals formed  a nuisance and should be removed. 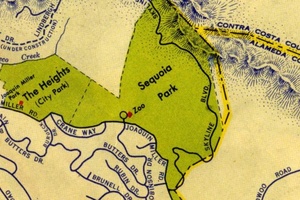