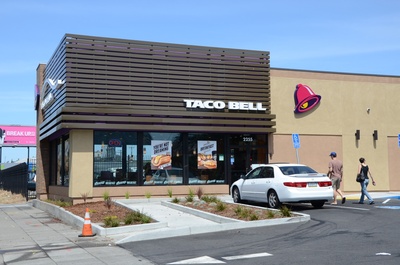 CC SA-BY Our Oakland
This is the entry for the (formerly) former Taco Bell at 2205 Telegraph Avenue on the northwest corner of Telegraph Avenue and West Grand Avenue in downtown Oakland (although some might call this the Uptown neighborhood, but real map geeks would say Northgate.).

Did this building use to be a Pizza Hut?

No, but I remember sitting in that drive-through long before that place became a Taco Hell … I may have been away from The O for ~20 years and only back 1.5, but my ancient fast-food memories are telling me – with ~90% confidence – that it used to be a Wack-in-the-Box.

According to the City of Oakland, in a staff report about the proposal to demolish the existing building and construct a new building, this was developed as a Taco Charley in 1977, and redeveloped into a Taco Bell (which bought the Taco Charley chain) in 1982. Source: oak037928.pdf

Fallibility of memory vs. web

Here is a classic example of the clash between soft, 3-decade-old human memory (direct experience) vs. the brittle, “factual” internet, where everything can be recorded and recalled. In this case, the above-mentioned 10% uncertainty (which, considering the borging of the chain you mentioned, should have been higher) referred to the nagging possibility of its having been a Taco Gnarley (despite the name, much better than Taco Hell). From the vague sense-memory of a fusion cuisine better than what’s there now, I had to decide, from all the kinds of joints I no longer frequent, which it most likely had been (any word on what was there pre-1977?). Stepping back for a moment from the issue, this is also a great example of the admirable reputation for thoroughness and diligence Oaklandwiki has quietly been establishing (probably due largely to the demographics of its early adopters … HAH!).

I figure if it’s not on the Internet, it’s not real. According to a quick online review of Sanborn maps, old Tribs, and Findagrave.com, 2205 Telegraph was a building with a “cleaning works” and 16 apartments in 1911-1912, a grocery store (under multiple ownerships) in the ‘20s and ‘30s, and a restaurant with a banquet room in the ‘50s – and the original building occupied the space that is now the Taco Belch parking lot, so the 1977 Taco Charley (which I’d never heard of before now) apparently included a demolition of the earlier building. Also worth noting is the fact that what is now called West Grand between Telegraph and MLK was then known as 22nd Street, and the current 22nd Street in this area was known as Jones Street. – NAParish

Off-topic, but I foresee an oakwiki-wide discussion brewing, on paywalled vs. open resources. Some of us are really jealous of your online Sanborn maps: “if I had those, why … I could rule the world! Muahahaha!”

If you want to have online access to the Sanborn maps, it's very easy -- get a San Francisco library card, and go to this URL: http://ezproxy.sfpl.org/login?url=http://sanborn.umi.com .

Back to the topic at hand …

"The property was originally developed in 1977 under regular building permits as a Taco Charley ... the building was modified in 1982 ... into a Taco Bell." 1  On October 3, 2012 a proposal was before the Oakland City Planning Commission to demolition the existing building in order to expand and modify the architectural design.  "Rebuilding and upgrading the restaurant will increase its ability to enhance basic community dining and social gathering functions in the Uptown neighborhood." 1  Really??  Taco Bell 'enhances dining' and 'social gathering'??  Since when and for whom??

This OCPC info interests me, as it seems to hard-corroborate what I’ve informally noticed about that general W. Grand/Tele area: that after several decades of being an increasingly sketchy, scary place, to move through purposefully while avoiding eye contact, it is fast rebounding in respectability (due to the massive hipster influx) and Taco Bell, now smelling profit in the air, hopes to capitalize on this. But among the many ironic aspects here, ya gotta love how fast-food joints use status words like “dining”, when what goes on there is more accurately described as “feeding”! –M 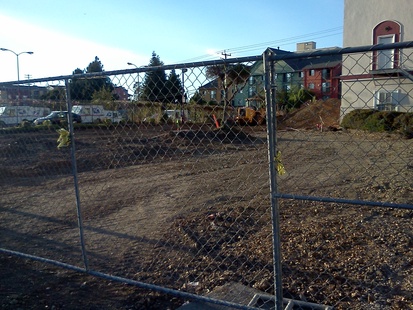 fig. 1: the dirt at Grand and Telegraph. (mk30)As of 09/2013, where once a Taco Bell of midnight sadness proudly stood astride the glowing remains of Taco Charley, there is now only a memory and a big ditch (see fig. 1, right). What does the future hold for the northwest corner of Grand and Telegraph? Will tacos past and arguments in the car and tightly held handmade cardboard signs gradually fade from memory leaving only the cold blue glow of the LED floodlights protecting the parking garage exit of some new building in theEmeryville Modern style? A building which itself will gradually lose its intended effect of projecting cold, mechanical, newness as grime starts to cling to crevices in the stucco and beer gets spilled on the sidewalk. Will we one day mourn the loss of what will maybe have become a beloved rent-controlled apartment that gets torn down in favor of the next new thing, or will we stride confidently into the future, looking forward to seeing what will come, relishing the perspective gained from having seen the world change around us, knowing that we are all a part of shaping the future of the spaces shared between us

The ditch has been replaced with a stripey, purple-glowy Taco Bell that someone, somewhere decided was more appropriate to our modern times. How is it more appropriate to the world we live in now than the previous Taco Bell? We do not have access to this information yet, but perhaps some adventurous Oaklanders will venture inside, order a seven layer burrito, and let us all know.