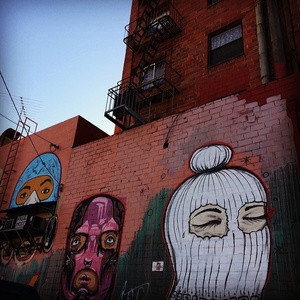 Free Pussy Riot Mural at the Back of the RPS Collective

Northgate is the neighborhood bounded by Broadway, West Grand, I-980 and 27th Street. Frequently it is lumped in with other neighborhoods like Uptown, or as part of the Koreatown Northgate business district.

Nearly 40% of the buildings in the area were built before 1939, giving the area a Charles Ware Art Deco and Victorian feel. The area has traditionally been mix of Eritrean, Yemeni, Korean immigrants mixed in with quirky Burning Man artists and working-class African-American families. After Jerry Brown's 10k plan in Oakland apartment complexes were put up to fill in the urban core of Oakland.

With the current SF gentrification many of the beautiful Victorian buildings are getting renovated as many artists, musicians and other creative young people flee San Francisco rents and relocate to Oakland. New bike lanes are being put up, murals are painted, and residents old and new struggle to work in the good from new changes without displacing the good of the old and making room for long-time lower income residents.

The nightlife is becoming increasingly diverse and busy. Former squats and underground speakeasies are being converted into cafes, bars, and restaurants. There's even a film theater here at the New Parkway featuring both mainstream Hollywood hits and indie film in a comfortable sit-down theater. Telegraph entertains  just about everyone on a busy Saturday evening, where ten years ago it was an empty after dark.

Northgate is home to the  art district that created the Oakland Art Murmur, the Rock Paper Scissors Collective, and is the center of First Friday events. World class galleries showcase all types of ranging from modern abstract sculptures to burning man contraptions to street art silkscreen prints. Interesting street murals such as the Free Pussy Riot Mural dot the area.

Many of the buildings in the area were originally used for various aspects of the automotive industry, contributing to Broadway's historic status as Broadway Auto Row.