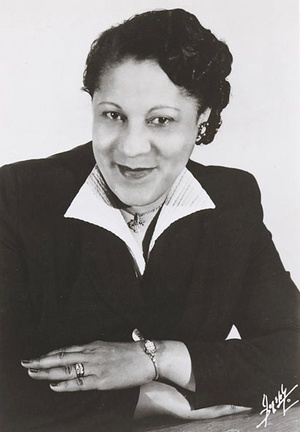 Tarea Hall Pittman (circa 1945-1960) 1Tarea Hall Pittman (1903 - July 31, 1991) was a civil rights leader who fought to abolish segregation in the Oakland Fire Department; was President of the CSACWC; organized branches of the National Negro Congress; for 45 years hosted the radio program Negroes in the News on KDIA radio station in Oakland, California; served in various important positions with the NAACP; fought to force war industries to hire African American workers during World War II; and was a lobbyist for passage of Fair Employment legislation in California and other states.

Her husband William R. Pittman was the first African American dentist in Berkeley.

In 2015, after a receiving a community petition of more than a thousand signatures, the Berkeley library board voted to rename the South Branch Berkeley Library after Tarea Hall Pittman.