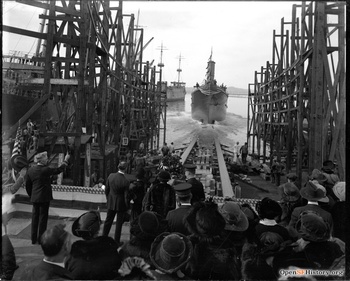 The Union Construction Company was a shipbuilding yard just south of where the Bay Bridge toll plaza is now. Construction was completed in 1919 2 and two ships were launched later that year; its last ship was launched just a few years later in 1923. 3 Walter Johnson of Berkeley was president. 10 It's unknown when it closed, a but a ship was towed there for breaking up in 1930. 7

At the time of its construction, it was on a small peninsula of filled land, 4 but plans were already underway to fill more of the area which became the Oakland Army Base. 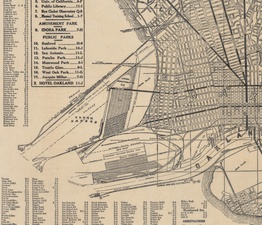 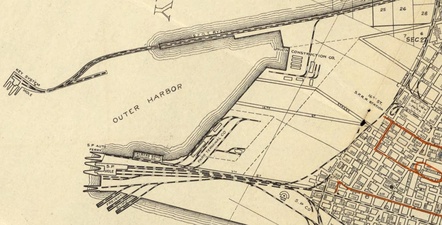 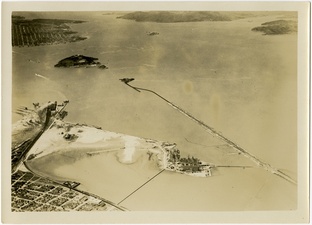 NOTE: For a ship's construction, there are generally 3 dates that are recorded: keel laid, hull launched, and commissioned. The hull launch was the most dramatic and was often photographed, but the ship was generally still a long way from being ready. For example, the Tampa was launched in April 1921, but wasn't commissioned until September 1921. 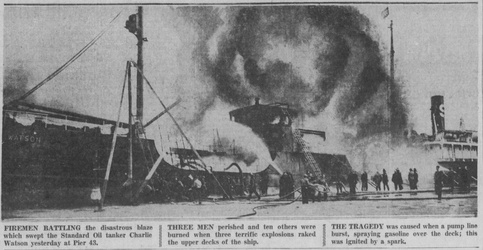 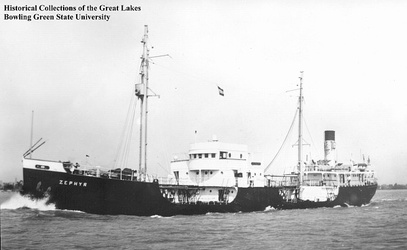 on the Great Lakes as the Zephyr 17

The tanker Charlie Watson was built and launched in 1920 for Standard Oil Company. 3

The ship appears in the shipping news with arrivals and departures over the years. But she made headlines up and down the coast in 1931, when a fireball exploded as the crew was unloading fuel in San Francisco at Pier 43. Five crewmembers were killed and 9 injured. Many were thrown into the bay by the explosions. The captain, Oscar Landahl of Berkeley, was badly injured and not expected to survive; 12,13 he succumbed to his injuries on December 7, 1931. 14

Despite the damage and sinking at the pier, the Charlie Watson was salvaged and later reconditioned. It continued plying the Pacific coast until 1939, when it was sold Buckeye Tankers of Cleveland, Ohio. 15 Renamed the Zephyr, she was pressed into service during WWII, then returned to duty as a regular tanker following the war. She was scrapped in 1948. 16 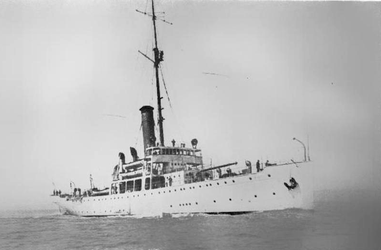 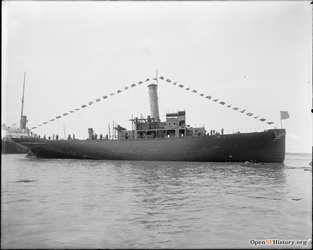 Four Tampa-class cutters were built at Union Construction for the U.S. Coast Guard. Each was 240' long and propelled by an electric motor, capable of speeds of 15.5 knots. 5 The sister ships of the USCGC Tampa were the USCGC Haida, the USCGC Modoc, and the USCGC Mojave. 3

The Tampa was launched in 1921. 6 The ship wasn't ready until September, and the crew members of the Tampa were upset because they had to live on a dilapidated scow while the ship was completed. 8

The Tampa was involved in the 1934 rescue of the SS Morro Castle, an ocean liner returning from Cuba. The captain of the Morro Castle died, a fire broke out, and rescue attempts were hindered by a raging storm. 137 people died.

In 1941, the Tampa was transferred to the U.S. Navy for wartime service. She performed convoy escort duty in the north Atlantic. The Modoc played a small role in the sinking of the German battleship Bismarck. The crew of the Modoc spotted the Bismarck while rescuing survivors of convoy attacks. This allowed the pursuing forces to find, disable, and eventually sink the Bismarck.

Following the end of the war, the Tampa, Modoc, and Mojave resumed ice patrols in the north Atlantic. 5 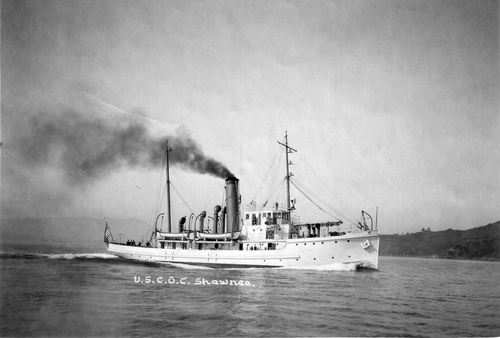 The tug Shawnee was launched November 15, 1921, 18 and commissioned March 8, 1922. 19 Often referred to as a cutter in newspapers, she was smaller than the Tampa class cutters at 900 tons displacement and 158' long. In addition to search and rescue duties along the West Coast, during Prohibition the Shawnee also patrolled for rumrunning ships trying to smuggle alcohol into the U.S.

But in 1923, Captain H.F. Howell may have been overzealous regarding the involvement of the Shawnee. He hastily arranged a meeting of officials in Monterey and informed them "I have been sent on a cruise to all coast ports to pass the warning to municipalities to get busy or the federal authorities will step in. I am making no specific charges or threats, but conditions must change." The local Prohibition Director, S.F. Rutter, replied that "I know nothing officially of the Coast Guard cutter Shawnee's visit to Monterey or the reported address of Captain Howell there, but it is well understood that the Coast Guard service has nothing to do with prohibition enforcement except for the detection of rum runners and smugglers." 20

After some frustration with the rumrunners being warned by radio every time the Shawnee left port, in 1924 they captured the heavily-laden Quadra with an estimated $1,000,000 in illicit booze aboard. The ship was British-flagged, and the captain immediately placed his case with the British Consul. 22,23 The captain maintained that he was more than the treaty-specified 12 miles from the coast and therefore the seizure was illegal. 24 But the case went to trial, with 30 defendants including the directors of the steamship company that owned the Quadra. 25 The trial went on, and included two crew of the Shawnee testifying for the defense, disputing their own captain and crew's testimony and records of the Quadra's position at the time of the encounter. Eventually 2 defendants plead guilty, and 8 more were found guilty during the trial. The conviction was appealed, but the court upheld the convictions. 26

The two crew members who testified for the defense, Jacob Schybinger and J.J. Dodson, were charged with perjury. They then promptly disappeared. 27 Two years later, Schybinger was captured and was being transported from Milwaukee back to the Bay Area. He was apparently depending on attorney Kenneth M. Greene to defend him, and upon learning that Greene had died, Schybinger snuck off the train near Berkeley and disappeared. 28

Although the last known ship was launched in 1923, the Union Construction Company yard was used until at least 1930 7 for the breaking up of old ships, and may have done some retrofits as well. A 1934 article refers to reconstruction and repair work done at the "former Union Construction plant". 9 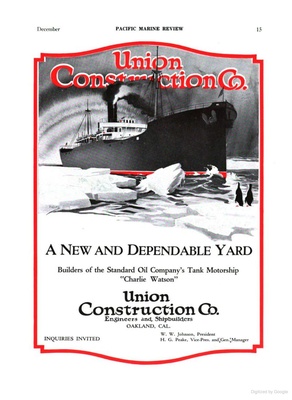