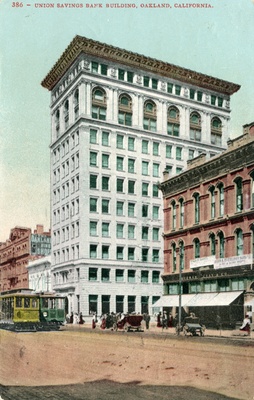 The Union Savings Bank - Easton Building is a Beaux Arts derivative skyscraper located at 1300-04 Broadway / 430-48 Thirteenth Street, Oakland, California. Designed by architect Walter J. Mathews in 1903-1904, the builders were Childs Pearson & Co., et. al., and Colusa Sandstone Company. This building was the first steel framed skyscraper and tallest building in Oakland and was built when major transportation advances were occurring throughout the city.

In 1874 the Union Savings Bank was at the corner of Broadway and 9th Street. 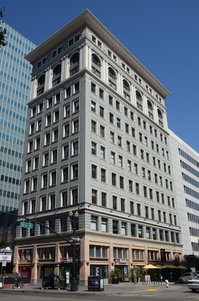 CC SA-BY Our Oakland"This is an 11 story Beaux Arts bank and office building (stores and offices since the 1920s), located at the northeast corner of Broadway and 13th Street. It is rectangular in plan, steel frame with a Colusa sandstone exterior (now painted). The three part vertical composition has a two story base, six story shaft, and three story capital. The shaft has paired windows set in a smooth wall, in simple molded frames and deep reveals. The capital has a giant order of paired Corinthian pilasters separating arched bays, and a wide cornice with some ornament removed. The ground floor has been completely remodeled with tile and aluminum storefronts. The 13th Street lobby is partially intact with light marble walls and a hanging iron chandelier. This building was damaged in the 1989 earthquake, and the upper floors have been closed ever since.

The building is extremely significant as Oakland's first skyscraper and first steel frame structure, predating the 1906 earthquake, by an important early Oakland architect. The Union Savings Bank was established in 1869 by A. C. Henry, just two years after the first bank in Alameda County. The 1903 building was admired for its steel frame "cast in this city" and stonework from a Colusa quarry; the building was built by "Oakland mechanics." It was one of Oakland's most photographed buildings. After the Union Bank was absorbed by the Central Bank in 1914, the ground floor was remodeled for commercial use." 1

This historic building is #4 on the list of District Contributors for the Downtown Oakland Historic District Registration Form. 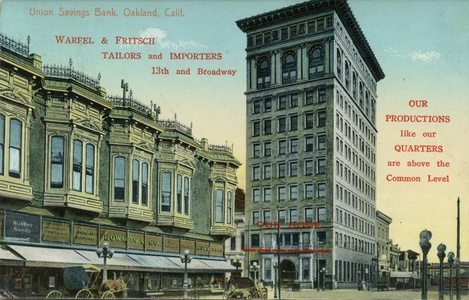 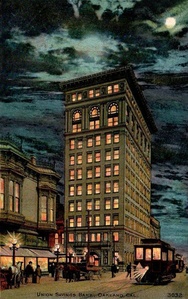 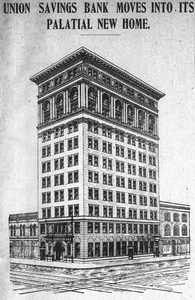 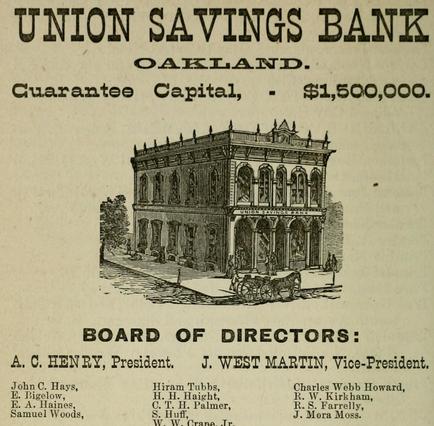