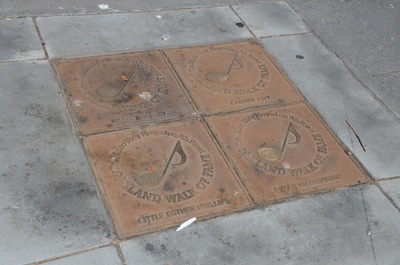 Walk of Fame, The Music They Played on 7th Street. is a history plaque project remembering the people behind 7th Street's heyday as "the Harlem of the West Coast",  a center of blues and jazz. 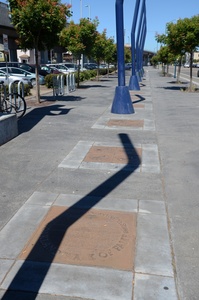 CC SA-BY Our OaklandIn the late 1980s, the Oakland Blues Society began working towards a walk of fame. In 2011ish, the Oakland Community and Economic Development Agency got involved. The project is in honor of Bob Geddins (owner of Big Town recording studio, where Rick Darnell and Roy Hawkins wrote the 1951 song “The Thrill is Gone”. This song made B.B. King a star) and Raincoat Jones. Future honoree: “Terrible Tom” Bowden (current resident!).

The Walk of Fame project dates back further than 2011. Ishmael Reed's Blues City (published 2003) has a section from Ron Stewart of the Oakland Blues Society (and Cole School alum) talking about it.

There are markers for numerous musicians and club owners, including:


CEREMONIAL RESOLUTION COMMENDING AND RECOGNIZING THE "MUSIC
THEY PLAYED ON 7th STREET, OAKLAND WALK OF FAME" AS A
PERMANENT HISTORICAL PIECE OF 7th STREET IN THE CITY OF OAKLAND

WHEREAS, "the Music They Played on 7th Street, Oakland Walk of Fame" pays tribute to the
great musicians, club owners, record companies and related independent businesses that put 7th Street
on the map as a top entertainment destination; and

WHEREAS, This installation is dedicated to those who created, produced, presented and
played America's indigenous musical art form - blues, jazz and gospel; and

WHEREAS, the Bay Area Blues Society saw the need to bring the musical history of 7th Street
in West Oakland to a new light; and

WHEREAS, the Music They Played on 7th Street will bring pride to the at risk youth of the
community and inform the general public of how 7th Street was referred to as "the Harlem of the West
Coast;" and,

WHEREAS, there is a great deal of history that 7th Street has not been noted for: the music
term "jazz," the first band to ever use the word jazz in its band name, and the style of music they were
playing was introduced by an Oakland born musician named Sidney Le Protti and his "So Different
Jazz Band" in 1915; and

WHEREAS, the Music They Played on 7th Street, Oakland Walk of Fame is located on
Street in front of the West Oakland Bart Station, from Center Street to Chester Street; now, therefore
be it

REVOLVED: The City of Oakland City hereby commends and recognizes "the Music They
Played on 7th Street, Oakland Walk of Fame" as a permanent historical piece of 7th Street's long and
glorious music era; and, be it

IN COUNCIL, OAKLAND, CALIFORNIA,
PASSED BY THE FOLLOWING VOTE:

LATONDA SIMMONS
City Clerk and Clerk of the Council of
the City of Oakland, California

View a map of all plaques courtesy of The Bay Area Blues Society and The City of Oakland.