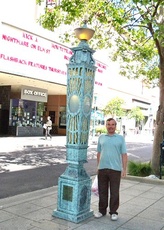 Jeff Deane Turner, (born, 1954) of Santa Cruz, is well versed in conspiracy theory. He has been on radio talk shows and has been published in works such as the magazine, Paranoia. He is best known for being a fan of the pop star Tiffany and being labeled a stalker because of it. According to Jeff, the complaints were prompted by Tiffany's staff and others. He says that he and Tiffany are on good terms now.

Jeff has made a number of film and television appearances, most notably in the award winning documentary "I Think We're Alone Now" (2008).   He has also acted in the Adult Swim show "Hot Package" (2013) and in a MTV video by the Norwegian death metal band The Teddy Bears.

June 1988 Jeff Turner, is arrested at a courthouse during Tiffany's emancipation hearings attempting to give Tiffany chrysanthemums and a samurai sword as gifts. The police never return the sword.

Sept. 1989 Tiffany goes to court to attempt to order Jeff Deane Turner, to stay away from her. Claims include following her, and sending numerous letters to her private address.

Sept. 1989 Los Angeles Superior Court orders Jeff Deane Turner to stop writing Tiffany, stop calling her, and to stay at least 200 yards away from her for the next three years.

Dec. 2008 Release of the movie "I Think We're Alone Now," A documentary starring Jeff Turner and Kelly McCormick who are fascinated with the star Tiffany. Fant-Asia Film Festival awards it "Best Documentary."

"Hello YouTuby-boobies!" (Opening words on one of his YouTube films.)

News articles through the years.

2011-03-29 08:20:00   I think it is just horrible that Jeff Turner has been vilified by the media. The people who are constantly accusing him of being a menace and harmful need to watch the movie and his youtube videos. They will see that he is a harmless man who is only guilty of showering celebrities with the attention and publicity that fuels their career and life! —174.124.183.240

2011-07-07 18:07:44   Jeff suffers from Aspergers Syndrome which explains the constant talking to strangers and lack of social skills. He is in no way a danger to anybody. Tiffany and Alyssa should feel flattered not threatened by him! —92.13.198.116