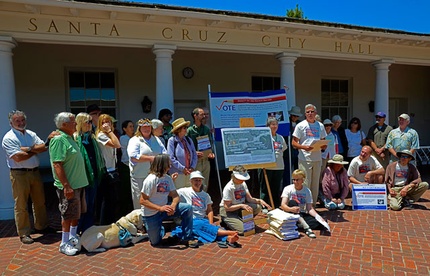 The Right to Vote on Desal Coalition gathered signatures in 2012 in order to put Measure P, the right to vote on the proposed desalination plant in Santa Cruz, on the November 2012 ballot. In addition to mandating a vote on the approval of the proposed plant, Measure P would prevent the city from going into bonded indebtedness in order to finance the project.

The Right to Vote on Desal Coalition spent several months in the beginning of 2012 collecting signatures to put the decision on whether to build a desalination plant in the City of Santa Cruz to the voters, and on May 29 they turned them in at City Hall. They collected 8,717 signatures in total, several thousand more than were required.