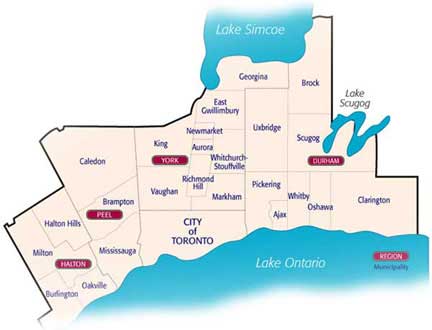 Today, the GTA includes the regions of Peel Region, York Region, and Durham Region which are immediately adjacent to the City of Toronto's current municipal borders.

As the city of Toronto has grown outward from its approximate origins in what is today's Downtown Core, the Greater in Greater Toronto Area, or GTA for short, the definition of what the boundaries are, and what is or isn't the GTA has also grown.

Before Toronto's last Amalgamation in 1997, the Old City of Toronto made up the Toronto in GTA while the inner suburbs of Etobicoke, City of York, North York, Scarborough and/or the borough of East York made up the Greater.

Referring to area code 905 often is shorthand for GTA minus Toronto which uses area codes 416 and 647.