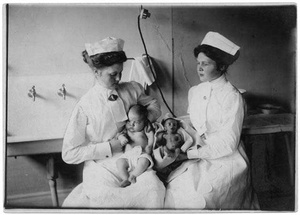 Two babies at the Infantorium, c. 1905. The one on the left has been in an incubator for some time while the one on the right is a more recent arrival. Photo MNopedia.An Infantorium is a infant incubator where, for a small fee, the public could see premature babies in incubators. An Infantorium existed in Minneapolis at the Wonderland Amusement Park, which opened on May 27, 1905.  During the early 1900s  incubators were a new technology and most premature babies died within a few days of birth. The exhibit worked both to promote incubator technology and save lives.

The price of admission paid for the staff, and parents owed the park nothing for the care of their baby. The incubators kept the babies warm, and nurses made sure that the newborns received regular feedings from wet-nurses. The babies remained anonymous during their time at Wonderland, though local newspapers covered their progress at the unit by giving them nicknames. Nearly all of the babies sent to the Incubator Institute survived. While such displays would seem strange today, at the time, incubator displays had been a part of the recent World's Fair in Paris in 1900 and at Coney Island.

The former Infantorium is now an apartment building in the Longfellow Neighborhood at the southeast corner of 31st Avenue and 31st Street.