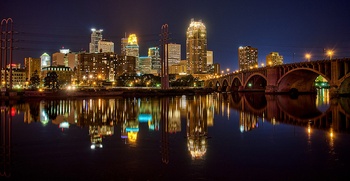 Downtown Minneapolis. Photo by  Matthew Paulson.Minneapolis (nicknamed "City of Lakes" and the "Mill City") is one of the Twin Cities along with neighboring St. Paul.  Minneapolis is the largest city in the state with a 2010 population of 382,578.  The larger metro area consists of over 3.3 million people and is the 16th largest metro in the United States.

There are 16 lakes and more than 180 parks in Minneapolis, maintained by the Minneapolis Park & Recreation Board.