Before its current name was established, the city of St. Paul was named Pig's Eye after the nickname of Pierre Parrant.  Pierre "Pig's Eye" Parrant was the first person of European descent to live within the borders of what would eventually become the city of St. Paul. 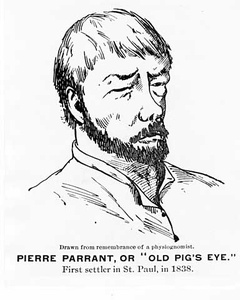 Parrant arrived in Mendota in 1832.  He began distilling his own liquor to make a living.  In 1838 he claimed a tract of land near the entrance of Fountain Cave, just upstream of Downtown St. Paul, on the west bank of the Mississippi River.  He built a small shack that became the first habitation and business in St. Paul.  Parrant was able to use a spring inside the cave to feed his still and he setup his tavern - known as “Pig’s Eye” or “Pig’s Eye Pandemonium.”  The tavern became popular among nearby residents, riverboat crews, and soldiers from Fort Snelling.

The city's name of Pig's Eye arose after a local resident, Joseph R. Brown sent a letter to a friend and used "Pig's Eye" as the return address. He received a letter back and the growing community became known as "Pig's Eye".

Luckily for us, a Catholic priest named Lucien Galtier arrived and built a small chapel in the area in 1841.  He was so disturbed that the community was named after someone of such ill repute that he exclaimed: “Pig’s Eye, converted thou shalt be, like Saul; Arise, and be, henceforth, Saint Paul!"

In 1844 Parrant lost his claim at Fountain Cave and was forced to leave.  Little is known what happened to Parrant after leaving St. Paul.  For more information check out the Wikipedia Article. 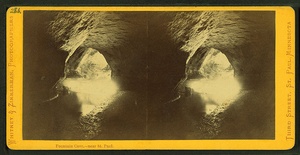