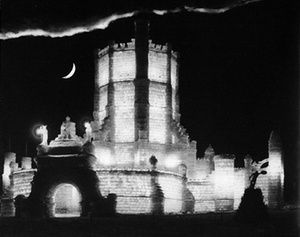 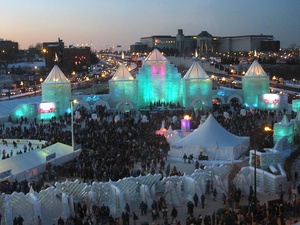 2004 Winter Carnival Ice Castle
Photo by Kendrick Erickson.The St. Paul Winter Carnival is an annual winter carnival that started in 1886.  The carnival was stared by the St. Paul Chamber of Commerce after a New York reporter described St. Paul as "another Siberia, unfit for human habitation" in the winter.

The 1886 Winter Carnival started with the crowning of King Boreas the First and featured an ice castle, bobsledding, ice horse-racing, and an elaborate creation made from the ice of Minnesota lakes, which has evolved into an internationally recognized icon for Saint Paul's festival.  The events also served to bring the community closer together including members of nearby Native American tribes. Many members of local tribes would ride into the city and pitch tents to participate in the Winter Carnival.

Over the years the carnival has grown and become a strong part of the community. The Royal Family makes over 400 appearances in a given year and participates in many activities to benefit the communities around the Twin Cities. 350,000 people are expected to visit the carnival each year, generating a $3.5 - $5 million dollar economic impact.

The Winter Carnival consists of the following events:

The Royal Family is selected through each characters fraternal organization, and in the case of the Queen and Princesses, a pageant-style coronation. The Royal Family consists of: