Dan Ezekiel is a retired Ann Arbor middle school science teacher and member of the Washtenaw County parks and recreation commission. He also writes a regular column for The Ann magazine. 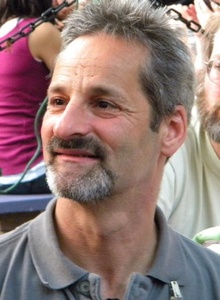 Ezekiel was born in Washington, DC, in 1956.  As a child, he lived in Virginia, Maryland, and California.  His mother, Navah Rubinstein Ezekiel (b. 1934), died in 1968.  His father, Raphael ("Rafe") S. Ezekiel (1931-  ) is a psychology professor who served one term on the Ann Arbor city council in the 1980's.  The family moved to Ann Arbor in 1964.  Dan has a younger sister, Margalete Ezekiel, and a younger brother, Joshua Ch. Ezekiel, who both live in California.  Dan's father, Rafe, currently lives in Boston.

Ezekiel has been a teacher with the Ann Arbor Public Schools for three decades, teaching at Forsythe Middle School. On his teacher's website, Ezekiel notes that "I love to ride my bike, and I usually ride at least 3000 miles per year, including commuting to Forsythe almost every day."  He retired from teaching in 2016.

Ezekiel was appointed to the Washtenaw County parks and recreation commission in January 2014, to replace long-time WCPARC member Nelson Meade, who retired. The appointment was made by the Washtenaw County board of commissioners for a term ending Dec. 31, 2016.  He was reappointed, and is currently serving through the end of 2022.

Ezekiel was one of the founding members of the Ann Arbor greenbelt advisory commission. His most recent term ended in mid-2013. Appointments to GAC are made by the Ann Arbor city council, and Ezekiel was term limited for that position.

Ezekiel was one of the founders of Recycle Ann Arbor in the late 1970s, when he was a student at the University of Michigan. He wrote about RAA's early days in column posted on The Ecology Center's website:

We were exhilarated to see how many residents had heeded our call to put their recyclables on the curbside. Being young environmentalists, we had assumed that young people would be our best “customers,” but we soon found that the older homeowners, who had lived through the rationing and recycling days of World War II, had never completely forgotten the habits they learned then. The backbone of the early RAA participant base was middle aged or senior citizens, often of German extraction. It was as if they had waited patiently for 33 years for someone to start collecting scrap metal, glass, and paper again!

Ezekiel is a graduate of the UM School of Natural Resources and Environment (SNRE) and holds a Masters in Education Leadership from Eastern Michigan University . His father, Rafe (Raphael) Ezekiel (1931-2020), was a UM associate professor of psychology and served on the Ann Arbor city council from 1982-1984 representing Ward 3.

Ezekiel was a contestant on the TV quiz show Jeopardy! in 1992, finishing second.  For many years he also coached Forsythe's Knowledge Master team, now known as the Thinking Cap team, leading it to 25 state championships, as well as top honors at the national and regional levels.

Ezekiel is married to Martina Harmon (Tina) Ezekiel, a teacher at Bach Elementary School. They have two grown children, Lewis and Elaine. The couple lives on Ann Arbor's Old West Side, in Ward 5.