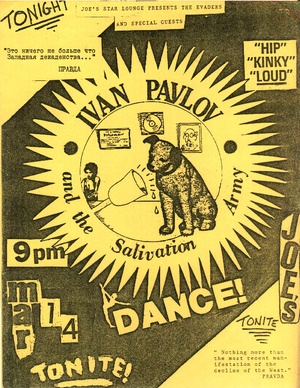 Local music impressario Joe Tiboni purchased and renovated the Star Bar and presented live music and dancing for barely more than three years before the site fell victim to the development fever that was sweeping Ann Arbor. One of the first multi-use retail/condo highrises, One North Main occupies the site today.

In its short lifetime Joe's presented major performers like the Persuasions, Sippie Wallace, Big Joe Turner, Mose Allison, Commander Cody, and Country Joe McDonald along with (then) up and coming groups like REM, the Fuzztones, the Violent Femmes, Los Lobos, the Replacements, Sonic Youth and the Dickies. Joe's also featured the cream of the local scene including The Urbations, Blue Front Persuaders, Gary Pryka and the Scales,SLK, Domino, Figures on a Beach, Steve Nardella, Dick Siegel and was for a while home to perennial Happy Hour favorites Michael Smith and the Country Volunteers.

The crowd at Joe's ranged from Ann Arbor hipsters to college students, lawyers, politicians, 80-year-old great grandmothers, and a substantial number of underage music fans drawn by the music, the energy, and the scene. The colorful staff at Joe's was a major part of its charm, especially the wait staff, who were known to set down their trays and lead the charge to the dance floor when the spirit moved them, often led by Mary Beth Doyle, who worked from opening night to the last afternoon. Later, Mary Beth would go on to become respected and loved as an organizer at the Ecology Center before her untimely death in 2005.

Prior to Joe's Star Lounge, the space at 109 N. Main Street had been home to Star Bar (Ann Arbor's Last Honky Tonk,) the Star Bar/Star Lounge, Dot's Tavern and at the turn of the century, The Orient, memorialized in the Michigan drinking song "Gotta Go Back to Michigan, (Gotta go back to Michigan, to dear Ann Arbor town. Back to Joe's and the Orient! Back to some of the money I spent!) unbeknownst to Tiboni who named it Joe's following a failed effort to purchase and rename Mr. Flood's Party as Joe's Bar and Grill thus closing a cosmic circle of sorts.