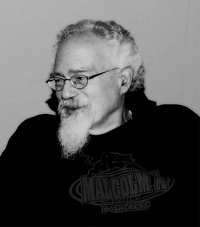 John Sinclair (born October 2, 1941 in Flint, Michigan) Detroit poet, one time manager of the MC5, Chairman of the White Panther Party from November 1968-July 1969. He was jailed during 1969 over the sale of two joints to undercover narcotics officers. His case recieved international attention when John Lennon performed at a benefit concert on his behalf.

In July 1969 Sinclair was sentenced to prison for 9 1/2 to 10 years for the sale of two joints to undercover narcotics officers. While in prison he wrote the books Guitar Army and Music & Politics, which he co-wrote with Robert Levin. Through his writing he became a national symbol of the fight to decriminalize marijuana. On December 10, 1971 John Lennon and Yoko Ono headlined the Free John Now Rally in front of 15,000 people at Crisler Arena in Ann Arbor, Michigan. Three days after the concert the Michigan Supreme Court released Sinclair and later overturned his conviction.

This initial "ten for two" concert led to the annual Hash Bash rally for marijuana decriminalization.

Now, at an age when most people have retired, he's about to join the vanguard again, preparing to help push the envelope of the state's medical marijuana law as he and a group of fellow travelers prepare to open what will be Detroit's first "compassion center."