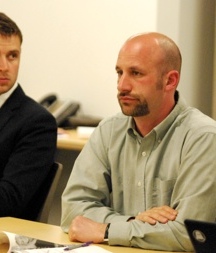 Mike Shriberg at an April 2014 working session of the Ann Arbor Energy Commission. (Photo courtesy of The Ann Arbor Chronicle.)Shriberg has worked in a variety of positions related to the environment. Until taking the job with NWF, he was education director at the University of Michigan's Graham Sustainability Institute. Prior to that he served as policy director for The Ecology Center, an Ann Arbor-based nonprofit, and previously was director of another Ann Arbor nonprofit, Environment Michigan.

He has served on the boards of the Michigan Environmental Council and the Rachel Carson Homestead Association. In 2010 he was nominated by mayor John Hieftje – and appointed by the Ann Arbor city council – to serve on the city's Energy Commission for a three-year term. He was reappointed in 2013 for a term ending October 31, 2015.

He is married to Rebecca Shriberg, a social worker. They have two daughters and live on Ann Arbor's south side.

November 7, 2013: Is reappointed by the Ann Arbor city council to the city's Energy Commission, for a term ending October 31, 2015.

July 2010-January 2015: Works as education director at the University of Michigan's Graham Sustainability Institute, where he taught, led undergraduate and graduate sustainability programs, and helped integrate sustainability into academic and operational functions of the university.

December 6, 2010: Is appointed by the Ann Arbor city council to the city's Energy Commission, replacing Jason Bing. His term runs through October 31, 2013.

2007-2010: Serves as policy director for the Ecology Center, a nonprofit based in Ann Arbor.

DATE? Serves on the board of the Rachel Carson Homestead Association.

DATE? Serves on the  board for the Michigan Environmental Council.

2004-2007: Works for Environment Michigan, first as the Great Lakes advocate and later as director of the Ann Arbor-based nonprofit.

2002-2004: Works as an assistant professor and program director of environmental studies at Chatham University in Pittsburgh.

2002: Earns PhD from the University of Michigan in resource policy and behavior.

Video of Mike Shriberg making a presentation on the newly launched Community Climate Partnership and community level action at the March 12, 2014 Sustainable Ann Arbor Forum on climate and adaptation.

Interview with Mike Shriberg regarding the November 2012 25X25 ballot proposal, which would require utilities to produce 25% of the state's electricity from renewable resources by 2025. – WEMU Issues of the Environment, Sept. 19, 2012

"A Housing Challenge at the University of Michigan" – Essay by Mike Shriberg published by the University Leaders for a Sustainable Future, February 2000

Resume and application submitted to the city of Ann Arbor in 2010 for appointment to advisory commission: Mike Shriberg app..pdf