Stephen Rapundalo (b. 1952), a former Pfizer researcher, currently serves as the Executive Director for life sciences trade group MichBio. He served as a Democrat on the Ann Arbor City Council representing Ward 2 from November 2005 to November 2011. 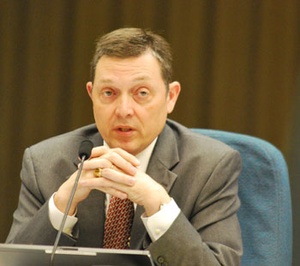 Rapundalo ran for mayor as a Republican in 2000 and lost to Democrat John Hieftje in Hieftje's first race for mayor. Rapundalo was elected to the Ann Arbor City Council as a Ward 2 representative in 2005, when he ran as a Democrat, defeating GOP candidate Thomas Bourque. In 2007, Rapundalo defeated write-in candidate Ed Amonsen in a close race. He did not face an opponent in 2009.

In 2011, Rapundalo faced a Democratic challenger, Tim Hull, in the August primary. He won with the smallest margin of any incumbent facing a primary challenge that year. He lost his seat to independent challenger Jane Lumm in the November 2011 general election. Both Lumm and Rapundalo had formerly run for office as Republicans.

During Rapundalo's tenure on council, he pushed unsuccessfully for a ban on plastic bags. He also chaired a council-created committee that reviewed proposals for development of the top of the Library Lane underground parking structure. He, along with the full committee, supported a proposal by Valiant for a hotel/conference center, but the proposal did not receive support from a majority of city councilmembers.

He is married to Anne Rapundalo. They live on the city's northeast side, near Thurston Pond.

Why a convention center can’t pass no – The Ann Magazine, June 2013