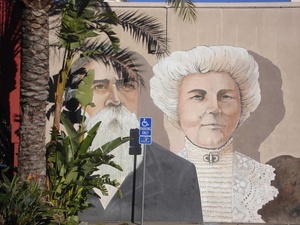 Annie and John Bidwell, the founders of Chico, are memorialized in a mural in downtown located on the 100 Block of West 2nd Street on the side of the building that once housed Grilla Bites. The mural is quite large, and partially obscured by the palm tree that was planted when Chevy's was located in the old Bank of America building on the corner of 2nd and Broadway (still currently home to Jamba Juice and, in late 2007, Crush). The palm trees were somewhat controversial, as it was seen by some as a disrespect to obscure the images in order to promote the restaurant.

2007-12-29 17:35:17   I've heard from a music instructor at Butte College that Woody Guthrie may have performed in the building that this mural is on... can anyone verify this fact? —RyanMikulovsky