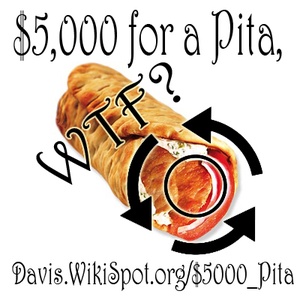 In early 2007 due to a clerical error, the Pita Pit charged a customer $5000 for a pita. This may very well be another world record for most expensive pita.

The following is the post on DavisWiki about the incident, understandably still irate about a multi-thousand dollar charge for a late night meal:

You will not believe this but the f'n Pita Pit charged me FIVE THOUSAND DOLLARS for a pita. No, I did not sign for it, they charged it to me after hours when they did their accounting. Not only did they charge me for it but they were snippy and rude to when i told them what they had done. Only after I fucking exploded at their cash register did they call the manager who came clean that she had found out about this three days ago and had not bothered to inform me. MAKING MATTERS WORSE, they tried to withold payment to my bank when they had the charges reversed by their bank. They were fucking rude and criminally fraudulent, not to mention that they didnt ever offer up a god damn apology for charging me FIVE THOUSAND DOLLARS. Fuck this fucking place, I hope it burns to the motherfucking ground. I WILL NEVER EVEN SO MUCH AS TAKE A PISS IN THERE EVER AGAIN. —TheShenkbone

Imagine the horrible sinking feeling of the staff that night when they balanced the registers. Something of the scene of "Oh, crap, we messed up" among the late night shift is captured in the reply (along with an apology):

I'm sorry about that. I was working there that night, it was a complete accident. We accidently added too many zeros when putting in the Gratuity amount. I'm sorry the manager was not aware. We decided to go straight to the owner after we realized the mistake. You should know that within half an hour you bank called, inquiring as to the five thousand dollar tip. We spent an HOUR trying to figure out how to void the charge after it had already been settled. We couldn't figure it out, the owner said he'd take care of it in the morning. Sorry for the inconvience. -The Pita Night Crew

2008-08-02 00:46:05   I've officially lost all respect for Jabberwock and StevenDaubert. They're obviously so weak and ineffectual they feel compelled to defend the clear bad guy and try to mitigate incompetence. Find a clue and actually read the original post! The original poster said the store knew of the mistake for 3 days and did nothing. How does 'calm and clear communication' help that situation? —davisGeek

2008-08-20 00:08:25   As usual Steven, your beat-around the bush style and mindless formulaism seek to obscure rather than clarify. You don't address the pita pit with-holding payment TO the bank, which is the second part of the complaint, which is possibly why the victim/customer had to address matters himself and is so pissed. Balance is not the truth, the truth is the truth, and the truth hurts! —davisGeek

The pita pit has changed ownership since, the employee's in question don't work there, unless the rude manager was Monica and then it's no suprise. Shekbone isn't around to complain anymore, and I give my friend endless grief for adding 3 zero's in the firstplace... What can you see coming from this that can be productive? —StevenDaubert Also I see they "tried" to withhold payment, does that mean it went thru eventually?

2008-11-13 22:39:00   Alright boys- I'm back. 1) awesome page. 2) Let's get this straight. What the pita night crew claims is total bullshit. I did leave an original tip to the transaction, for one dollar. The pita pit said to me that the cause of the charge was that during the after-close fun of cards with tips (my total was $7.14) they forgot to press enter after punching in the previous amount (for exactly $5.00), and then entered in my total, ran my card number, and pressed enter. This jibberish about me tipping 5 Large is exactly that: jibberish. 3) After being informed by a helpful dude behind the counter that I was there and that I was pissed and that her store had ganked 5 Large from my accts, the manager at the time, a middle aged woman, did not really care to get up from her drink at Soga's to come fix this problem until I threatened to get the Sheriff to come and arrest her for grand theft. It's basically an empty threat but when somebody empties your bank account, sorry friend, I am not going to be calm and communicate about my feelings. 4) I am fully sensitive to the plight of the man behind the counter. But again, you have to show great passion sometimes to knock people out of their passivity. I wanted my money back, ASAP. If youre not going to get heated then, you're a total bend-over-and-take-it-bitch. Not I, said the fly. 5) yes. that shit went through and Wells Fargo had to scratch at the friggin bank of the Pita Pit to give up the money. 6) it's been what, two years since this happened, and I have yet to set a single toe back inside the Pita Pit since.

I'm pretty sure I know who that manager was, she had given me terrible service before a couple times... —StevenDaubert