Was replaced by the delicious Queen of Sheba 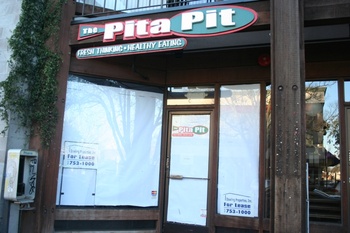 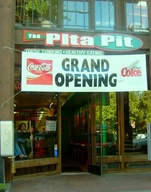 UNFORTUNATELY PITA PIT WILL BE CLOSED UNTIL FURTHER NOTICE, DUE TO FINANCIAL CONCERNS. (Owner wanted to invest elsewhere)

The Pita Pit is a Canadian chain that offers pita sandwiches and salads. You pick the type of pita you want, such as "Chicken Crave" or "Philly Steak," then pick the veggies and sauces while the hot ingredients are grilled. The pitas are (possibly) delicious, if nothing else than by virtue of choosing exactly what goes in it from many ingredients, and can be a healthy and unique alternative to the other late-night dining options, such as Jack in the Box or Del Taco.

They offer a plethora of vegetarian options.

The "customize your pita" concept is powerful, but sometimes too powerful! If you order a falafel (an especially popular item if you're a vegetarian) there are a few things to keep in mind. They usually ask when you order a falafel whether or not you'd like the falafel balls cooked in the microwave (the grill is where they cook all the meat, and if you're a strict vegetarian that's usually gross). If they don't ask, then just say you'd like the balls cooked in the microwave and they will gladly do that.

However, if you are not a vegetarian, but you want to order a vegetarian pita, be sure to tell them that they don't need to change their gloves. Otherwise, they will waste a pair of gloves just to make your one pita.

Other items have "traditional" styles (such as the Chicken Caesar) that you can ask for.

They deliver, just not west of 113, and not out at mace ranch. There's a minimum of two pitas per delivery and a $4 delivery charge. Delivery hours are subject to change with out notice based on available drivers. They generally don't deliver up to an hour before closing. As of Febuary 2007, the range has been expanded, and they offer to remove the more-than-one-pita for deliver stipulation for certain UC affiliates.

Pita Pit also offers a secret menu if you feel like asking for it when you come in! —JackkiCox

2008-01-07 02:50:33   I love that they will nuke the falafel & change their gloves for us vegans. The pitas are pricey, but if you load up with veggies they make a full meal. I always add their secret sauce & hot sauce, yum! Considering the late hours the employees have to work, I have always found the service to be helpful & friendly enough. I was a little freaked out when I used their bathroom (Friday night), & I was joined by not one, but two cockroaches. I let the woman behind the counter know, and she said they have been coming in from outside. I wasn't sure about that, but I do realize most fast food restaurants probably get them at some point. I just hope they make sure to get the problem under control. —AprilAries

2008-03-08 20:07:26   So the other day I was sitting in Starbucks when Kimmy (kammy, kimmie something like that) the daughter of the Pita Pit's owner walks in with a fellow coworker and orders a mocha frappachino. The lady who made the drink said, "sorry you can't see the chocolate sauce, the whipcream is a little softer than it usually is so the sauce just sort of sank into it" To which Kimmy just looked at the drink and then stared at the Starbucks woman, making no effort to reach for her drink. Seeing trouble the manager rushed over and said, "Oh we can make you another one if you want" to which Kimmy said "would be nice." Then she left, leaving her coworker behind to get her drink for her, and on the way out said audibly: "cuz we DID pay for it." Her coworker remained the extra couple minutes for it to be remade, and the lady put it on the bar, to which the coworker said: "actually, I'm going to need more sauce than that...." so the starbucks lady squirted more on. I used to like the service sometimes, but the people who replaced Sierra's troupe all seem pretty awful. ps. Eat at Plutos instead. —Horatio

2008-07-19 19:04:46   I really like this place. They always have great service, and when I ask them to put "extra" of something on my pita, they are happy to comply. My friend and I stop by from time to time after walking the dog, and when they see us leave the dog outside they always offer us water for him. —themichelle

And it would be in a different location, since Queen of Sheba is moving into that location. —CovertProfessor