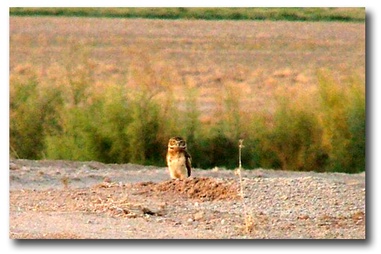 A burrowing owl by its den Western burrowing owls are a species of terrestrial owl found from the west coast of Canada (Saskatchewan, Alberta, and British Columbia) and US, east to the Mississippi River, and south into Central America and South America. They are native to California's Central Valley but have experienced dramatic declines and even extinction in some parts of their range. Burrowing owls feed on small vertebrates, such as frogs, lizards and mice, and large insects such as grasshoppers and beetles. The species is most active around dawn and dusk and can often be seen during the day.

Burrowing owls have large yellow eyes and their bodies are mostly covered in brown feathers dotted with white spots. The owls are relatively small, standing around 15-23 cm. Burrowing owls are capable of flight and some individuals do migrate, but they are often seen standing on the ground. They live in burrows—in our region most of these burrows have previously been dug by small mammals such as California ground squirrels—although in southern California burrowing owls commonly dig burrows in the sides of irrigation canals. A burrow network is essential for the survival of a burrowing owl because it provides a means to escape from predators such as hawks. The burrows are also used in spring to lay a clutch of eggs and raise offspring, usually between 3-5 chicks. The chicks are completely helpless after hatching and are taken care of by both parents. Commonly, parents return to the same burrow system each year to breed and raise offspring unless the burrow is destroyed or disrupted, although occasionally “good” burrows are abandoned as well. The average life expectancy in the wild is between 6-8 years.

The Status of Burrowing Owls in Yolo County:

Much of Yolo County used to be excellent burrowing owl habitat, and hundreds of pairs of these owls lived in the area. They require very low vegetation and available burrows, because they must be able to see off in a distance to detect incoming predators. Perfect conditions for them used to be found in gently rolling native grasslands where grass was very short, squirrels dug burrows, and the owls could sit on a gentle rise during the day. Other suitable environments include edges of cattle pastures and row crops or alfalfa fields where the squirrels are active but the vegetation is low. Burrowing owls can even inhabit peri-urban settings such as near airfields, golf courses, and even parking lots if they can find a safe place with burrows, and vegetation remains low.

Development in Yolo County, especially around Davis, led to declines in their population over the last several decades. Before a census done by the Institute for Bird Populations starting in 2006, major issues contributing to their decline were building (Mace Ranch, UC Davis Colleges at LaRue and UCD School of Veterinary Medicine all were built on top of excellent and inhabited owl habitat); and conversion to orchard agriculture, which is not compatible habitat for owls. In response to development on burrowing owl habitat in Davis and an associated legal settlement, the City of Davis created an endowment and mitigation site on the Yolo County Grasslands Park for burrowing owl conservation, although there has been no breeding at the site since 2003. Until about a decade ago, there were a few pockets of the county where owls could still persist, including in Dunnigan and Winters, in the far south of the county near Clarksburg, and in Davis on the Wildhorse golf course, in a few little wild parks near Mace Ranch and near the Covell/I-80 corner. Almost all of these are now gone. The Burrowing Owl Preservation Society and Institute for Bird Populations (IBP) did a large county-wide survey in 2014 using the same methods as IBP's 2006/2007 published census, and showed that, since 2007, there has been a 76% decline in burrowing owl pairs. Where there used to be 30 or more pairs near the Wildhorse golf course, during the 2014 census there were only three pairs. As of summer 2015, there was only one and it hasn’t reproduced in the last three years- it flew around trying to settle. The other pair is a well-recognized pair near the Target in East Davis on a vacant lot that is slated to be developed as soon as a developer buys it and files plans that are acceptable to the City.

Friends of The Burrowing Owl (FOBO):

In response to the decline, Drs. Janet Foley and Lisa Tell at the UC Davis School of Veterinary Medicine organized a group of UC Davis and high school students in order to promote awareness of the decline in the burrowing owl population. These students decided to name the group Friends of the Burrowing Owl (FOBO). The organization is made up of different teams lead by student captains who monitor work over the different actions the organization. The current teams are Vegetation Monitoring, Burrow Monitoring, Outreach, Fundraising, and Road kill Collection.

The Vegetation Monitoring team is tasked with determining if the height of the vegetation at the current and future sites of burrowing owl activity is the low enough for high quality burrowing owl habitat. The Burrow Monitoring team checks for burrows in known and future burrowing owl habitat to make sure that there are places for the owls to use as habitat. Both teams also report data to the City of Davis to help them focus resources at the right time to ensure best habitat for the owls.

The Outreach team is responsible for getting the word out in the community about the plight of the owls through social media and advertising at the Davis Farmer’s Market or other venues. The fundraising team helps raise funds for all of the other teams’ activities, and works closely with the outreach team in order to help gain more support. Both teams work closely with the design team who create pamphlets, a website, and other materials to be used in fundraising and outreach.

The Road kill collection team looks for and collects road kill around Davis, especially near burrowing owl habitat. The road kill is then analyzed for traces of rodenticide and other poisons as well as West Nile virus. Road-killed barn owls are unfortunately common, and even burrowing owls have been found hit by car. Raptor testing is done in collaboration with the California Department of Fish and Wildlife Wildlife Investigations Laboratory. The poisons are used on agricultural land and even near homes to control rodents and could also affect owls’ survival and reproduction.

This is a local non-profit group cofounded by Catherine Portman and Pam Nieberg. They have been active doing owl surveillance and advocacy for many years. They also help install artificial burrows for owls, maintain proper vegetation height, and are working with groups trying to get the owl protected as an endangered species and for mitigation sites to be monitored and maintained so that they are useable by owls.

The burrowing owl is the mascot of the Yolo Audubon Society. See their website for a photo of this curious creature.

For more information on the burrowing owl and efforts to protect it, contact:

Friends of the Burrowing Owl (based in Davis). They also have a Facebook page.

The Burrowing Owl Preservation Society (based in Yolo County)

For more information on other winged friends in Davis, see Birds and Bird Watching.

ALERT: Sadly this information is out of date and almost all of these owls are gone!!! They used to be: at the end of Loyola Drive by the baseball field. The fenced-in Calgene Greenhouse lot between the DISC and Schilling Robotics on 2nd Street has several burrowing owls. You can also find several in the walking/jogging path around the north and east side of Wildhorse, particularly the ag buffer. Just drive north on Pole Line and pull over after the houses next to the golf course. Or drive north on Mace Blvd. around the bend at the edge of town, near the new Mace Ranch School. Several owls ironically hang out on a land developer's sign on the edge of the fields, east side of the road. Also, The Colleges at La Rue was built on burrowing owl habitat and breeding areas in addition to foraging and nesting sites of Swainson's Hawk (a state threatened species). If you catch the owls under the right conditions, you can have a walk at Wildhorse where they are popped up on either side of the path like Muppets. You can go from never having seen one to having seen ten in a matter of 20 minutes.

NOW: They are rarely seen now at the Golf Course, there has been a pair across from Target, and during winter owls fly through looking to see if they can find the right conditions to settle. 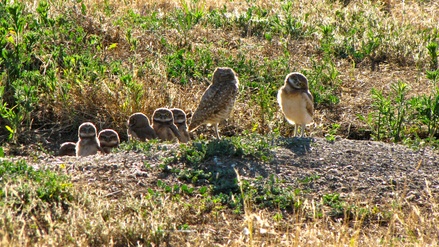 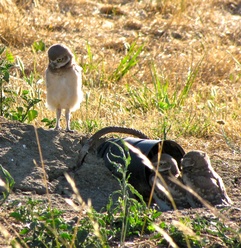 Owls can use custom-made artificial dens quite successfully

2012-06-13 13:03:43   I haven't seen one behind my house (the Mace Ranch preserve thing) for a few years now. I used to see them all the time, until some new housing development began construction. Sad... —CecilioPadilla 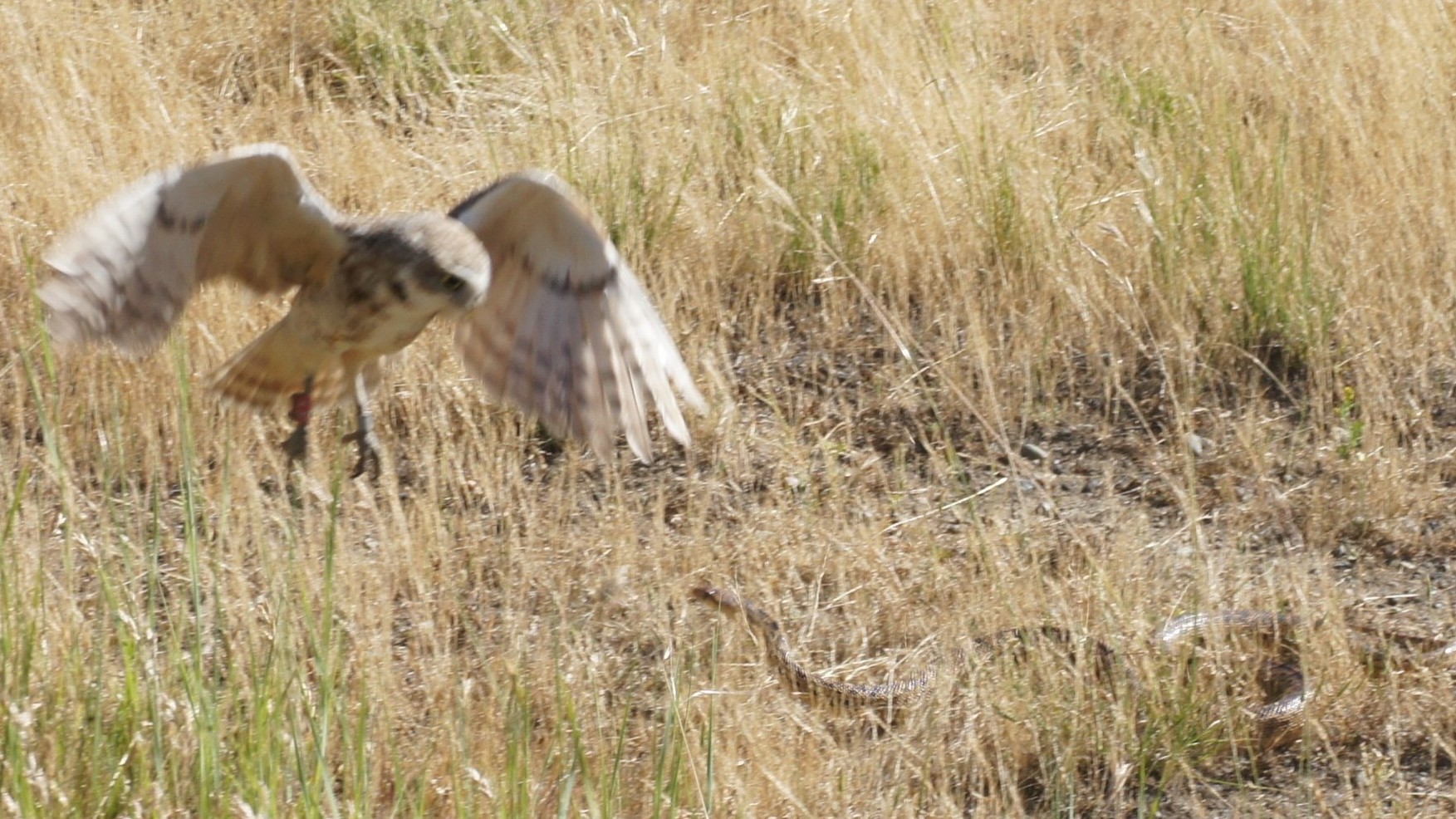