Davis Electric Cars was the first exclusively electric car dealership in Davis. Their phone message says they have "temporarily relocated" to Sacramento; they continue to service electric cars (as of 8/09). They had several models, including the Xebra Sedan, Xebra PK, and ZENN. They also had a wide range of electric scooters and motorcycles. The Davis Food Co-op can be seen using their Xebra PK at the Farmer's Market and around town. 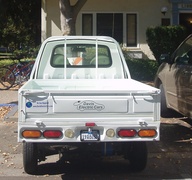 As promised, a Xebra PK parked near the Farmer's Market one Saturday in Summer 2008

These are some events which Davis Electric Cars attended:

2009-02-12 19:25:53   I have a very bad experience with Davis Electric Cars. The people there are friendly but do not deliver results. I bought a Zappy 3 on the mother's day 2008. It was broken three times in a two months period. They finally replaced another one for me. However, it was broken again. When I returned it for repair in October, 2008. It was just sitting there forever. They did not give me a call. After several visits to their shop in person. They promised to solve the problem soon. After several weeks, the problem is still not solved. I left another message to a person there. Now it is Feb. 12, 2009. I still have not received response from them. I am very frustrated. Be very careful with this company!!! Any suggestions to get my Zappy 3 or refund for it is appreciated. —legofun

2010-02-26 22:51:03   Perhaps they were feeling competition from these folks: http://www.newsreview.com/sacramento/content?oid=865074 (Why would there be another ZAP dealership 15 miles away? Normally dealers get exclusive territories.) —SteveDavison