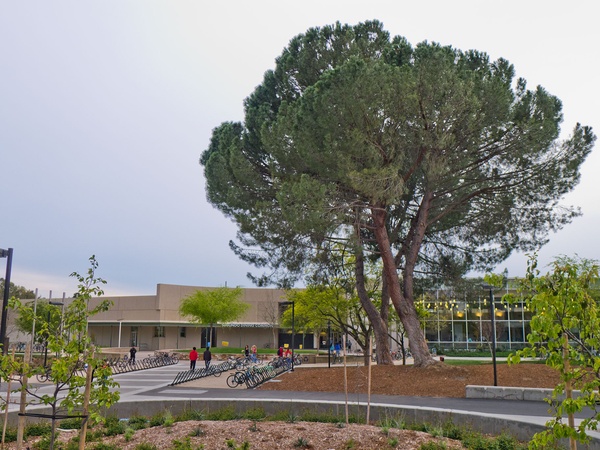 The Dining Commons, or DC for short, are where freshmen living in the dorms eat. All freshmen living in dorms are required to buy a meal plan through Student Housing, but anybody can purchase meals at the dining commons. All of the DCs are run by the corporate giant Sodexho, the largest food service provider in North America; Sodexho also controls The Silo and the cafe at the ARC.

Meal plans work on a "swipe card" system where the residence hall students may enter the DC and pay with a swipe of their Aggie card which has been pre-encoded with a certain dollar value. The student may then eat as much of anything as he/she pleases and consequently gains the Freshman Fifteen. Swipes can also be used to purchase snack items at the DC stores such as Trudy's, Crossroads, and The Junction, but this is generally considered to be a rip-off (see Aggie article) (this practice needs to be outlawed). According to the California Aggie 1 swipe costs anywhere from $5 to 7$ depending on your meal plan.

Those who don't live in the residence halls can pay at the door with cash or a credit card, but other than the all-you-can-eat advantage, people might not be willing to pay to eat there. Sodexho also has a Aggie Cash system that can be bundled with a meal plan or purchased separately. Aggie Cash can be used at any Sodexho run food trough on campus. A final option would be to get a 40 ounce Meal Plan.

Apparently, the DC has changed breakfast hours to a start time of 7AM instead of the previous 6:30AM time as of Fall Quarter 2011.

Segundo Dining Commons construction, February 2005. There were four dining commons on campus Now there are 3:

Before the closure of the Castilian DC and renaming of the Oxford Circle DC, you could take the first letter of each of the dining commons alphabetically (Castilian, Oxford, Segundo, Tercero) to get C.O.S.T.

Contrary to popular belief, the food served at the Tercero Dining Commons is exactly the same as the food served in the other DCs and it is prepared in exactly the same way, though the presentation differs. Some claim that the selection in the Tercero DC greater, but that may be because it serves fewer people, therefore, more food is left. Or perhaps the cooks are better, or less rushed, or something.

Since the Segundo DC was renovated in 2005 with a state of the art kitchen, all meals have been prepared there and quick frozen before being delivered to the various Sodexho outlets on campus. Theoretically, there should be very little difference in the food served at each dining common because all cooks do from that point is final cooking and presentation.

The rumor (or truth) that Tercero is the best has been around since at least 98/99. At the time, I was in Regan, so used the Segundo DC normally, but I worked near Tercero, so I occasionally ate lunch there. I found the rumors that it was better to be true, but largely because it was less crowded. This resulted in two things - more of the good food available, and a more pleasant dining experience. I think that some of their food may also have been a bit fresher. I don't know whether any of this still applies today, or if this is a rumor that just refuses to die. —JessicaLuedtke

I believe it to be the truth. I'm not a fan of dorm food, but for some reason, the food in Tercero is just better. I don't know why, but whenever I actually go to the Tercero DC, the food is better. A friend hypothesized that the quality of food is better because there are actually more adults (faculty members) who pay to eat at Tercero where as at Segundo, it is just mostly students so they make the food better to please the adults.-AliciaHall

The pizza at Tercero is by far the inferior pizza, and while I prefer Tercero (even though I am a Segundo resident), it is for aesthetic reasons: There is more light, less people, its on the second floor, etc. On the other hand, Tercero was designed for convenience of the staff, so while all the cooking and cleaning areas are together, we the sutdents have to travel from one side of the DC to the other in order to get The Bistro and a glass of Milk. The food quality of the two DCs average out, and they often serve the same meals (which can get irritating if you want any sort of variety or differentiation). —Max Mikalonis

Tercero and Segundo DCs have exactly the same number of food stations do they not?

The Segundo and Tercero dining commons have a different layout, but serve the same thing. Sometimes you'll see differences in sodas/juices offered, or condiments at the salad bar. But usually if you nag them about it for a couple weeks via the comment box, they'll put in the flavor you want (I did this with cranberry juice in Tercero). The Tercero kitchen and dining area is BY FAR more spacious than Cuarto, and slightly larger than Segundo so maybe that effects the outcome of the food? -AbbyLawson

Once a one day a week occurrence, the Dining Commons no longer provide trays. Presumably to be ostentatiously "green" they started a program called Trayless Tuesdays and have since extended it to seven days a week. In reality, it is probably just a scheme to save them money on food costs because people generally waste less food when they don't have a tray to pile it up on.

Back when people had trays, they used to to pile the food onto their trays like crazy. This led to a huge amount of overeating as well as a huge amount of waste at the end of the meal. When you can only carry a few items at a time, you end up eating less. Who wants to get up and wait in line multiple times? The Freshman 15 was a much bigger problem in the past.

During the 1999-2000 school year, due to massive overcrowding at the Segundo DC, a dinner time only Dining Commons was set up at the Primero Grove Commons building. The mini-DC served made to order pasta cooked by a chef. There was a mini-salad bar, fruit bar, build your own sandwich bar, soda fountains, and an ice cream refrigerator for ice cream treats. This DC was open to all students and for a time it was quite a popular place as you could pack up a hot pasta meal in a styrofoam container and fill the rest up with food to go. Most students used it as a To-Go DC much like how students get To-Go Lunches at the DCs except that you could build your own meal.

The DC has gone through many changes over the years. Back in 1999, they used to have a "From The Earth" vegan section. However, this food section was very unpopular. The switched that area to "Healthy Planet" featuring vegetarian selections and dishes. This separate area was self-serve and often had no line at all since people didn't even know about it.

The Tercero DC used to have a conveyor belt type system where you would put your used trays filled with dirty dishes after you were finished eating. The belt would then take the tray through a window to the back area where workers would empty the trays and wash the dishes. The old Segundo DC did not have a conveyor belt. They instead had two windows where you handed your tray to workers who would frantically wash the dishes.

The old Segundo DC used to be a hazardous place. There were times when people would accidentally drop dishes of food due the crowded and cramped nature of the old building. A worker commented once that he had seen people wearing flip flops lose toes that way.

2006-01-13 13:05:12   What I want to know is: when students leave (graduate, whatever), and they have unused meals on their Munch Money/meal plan cards, what do they do with these cards? They can't get a refund, can they? Do they give them to poor people? Or what? —SteveDavison

Update: Just found out that, for freshman anyway, the meals are turned into Aggie Cash (Munch Money) at the end of the Spring Quarter, at a rate of $2.00 per meal.—ManiGandham

2006-09-12 02:13:47   People rave about how great the Segundo DC is now that they let staff in for $5.75/meal. Don't believe the hype. The food is just as crappy as DC food has always been, virtually indistinguishable from the slop we were fed in 1992. They just make it look nicer now.. Go get a similarly priced buffet at Raja or Great Wall for food that sucks, but is orders of magnitude better than the prison food they foist on unsuspecting freshmen. —ChrisLambertus

2007-06-09 23:29:14   I heard from a few people who "friends" work in the DCs and they said that LAXATIVES are added in the food. From my digestive system, I would not disagree with those claims. —DonGibson

I wouldn't say they add laxatives (I do not understand why you saw the need to capitalize this), however the food likely contains fatty oils such as is seen in many common potato chip varieties, viz pringles. In would be illogical for them to poison the students in any way, what they provide is the simple basic caloric needs of the students without great account for the healthyness or tastiness of what they call food. ~Dave

Technically, no—but there have been some exceptions (based on when I was in the dorms and from more recent discussions). You were able to use one of your meals to make a fairly hearty bag lunch, which was my mode of choice since I could never make the lunch window due to work/classes. You could take out a piece of fruit that you were in the process of eating (the enforcement of this policy varied). Furthermore, it would seem that one can fit quite a bit of food in the Campus Mug you receive upon entering dorm life. This last, of course, is purely conjecture since it would obviously be frowned upon. —KevinChin

At the Segundo DC, you are entitled to carry out one fruit from the fruit bins or one soft served ice cream cone or one of the popsicles/ice creams/ice cream bars/whatever-icy-things-happened-to-be-stored-in-the-freezer. The particular item does not have to be in the process of being consumed. I cannot say for sure that this policy applies to all DCs, but there is a good chance it does. —il

2008-05-23 10:29:35   I once had a customer come into my work asking me where the dining commons are. I gave him directions and then he told me that he was taking his family and brother's family there because it was supposedly this really fancy great place. I wonder if he was confusing it with another place. Anyone have any idea? —SunjeetBaadkar

2009-10-11 12:18:02   I really must disagree with the majority of the negative comments, although I'm sure it is possible things have changed. UC Davis does have one of the best dining common food in the country.

It has variety, it has the healthy stuff, it has the snack food, the comfortable couches, etc. Food is fresh-made, accommodates a variety of diets, and is simply a good deal better than dining common food elsewhere, as my friends can attest to at their various colleges. —DChang