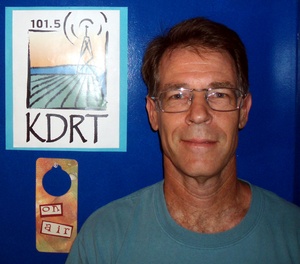 Science in the Capital:

His alternate history novel The Years of Rice and Salt is partially set in Davis, as are portions of The Martians, a companion book to the Mars trilogy. Though not set in Davis, issues discussed in many of his books, such as Cooperative Housing and businesses, Choice Voting, false/post scarcity economics, Climate Change, and trying to clear nutsedge out of gardens, will feel familiar to Davisites. Robinson's latest book, Fifty Degrees Below also featured Disc Golf in a Washington DC park, which may have also come from his residency in town.

Kim Stanley Robinson occasionally has book signings at Davis Bookstores, and signed copies of his books can often be found at The Avid Reader and Bogey's Books. He is an occasional speaker on campus, and has been seen at the Davis Food Co-op and Sudwerk.

He was an activist regarding West Village. Before it was built, he wrote an op-ed for the Davis Enterprise suggesting it be built north and south of Hutchison Drive parallel to Highway 113 without bordering Russell Boulevard and helped with legal action by a West Davis residents group.

This guy needs to start editing the wiki! - KenjiYamada

I'm a big fan... where do I find more information about his current projects and dates of his talks in Davis? - ClaireB

According to my sources in the publishing community he doesn't have anything scheduled to be released, but there is one that is supposed to be out next year (but there is no set date). However since he has done a lot of short stories over time, its hard to say what he may or may not be working on without me just calling him up and asking. Of course, that'd be sorta rude. Although, I suppose I could call up Random House and ask... -SunjeetBaadkar