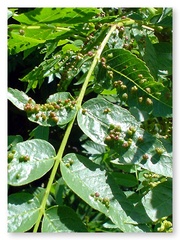 Leaf blister galls on a black walnut in early spring. 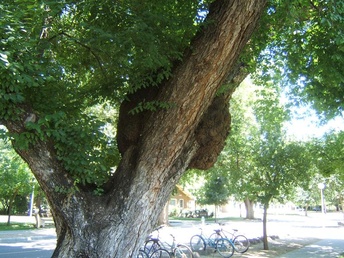 That huge oak gall over by Olson Hall 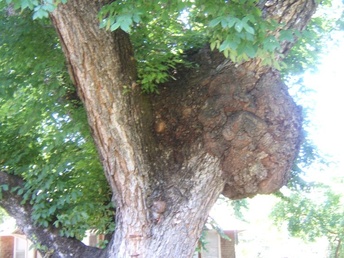 The giant wasp that formed this gall can be seen hovering around Olson Ha are irregular plant growths arising from a reaction between plant hormones and growth regulating chemicals produced by some insects, mites, fungi, and bacteria. More than 100 different kinds of gall are found on oaks and can appear on leaves, bark, flowers, buds, acorns, or roots, but leaf and twig galls are most noticeable. Each insect-caused gall encapsulates an insect that gains nutrients from the inner gall tissue and protects its inhabitant from natural enemies and insecticides. Typically, galls begin forming as new leaves begin to unfold in the spring. Bacteria, such as Agrobacterium tumefaciens, usually infect at any wound sites on the plant, and express genes on a certain plasmid that secretes growth hormones, causing a tumor gall to grow. "Crown gall", caused by this bacteria, usually forms on stems and roots.

Leaf galls rarely affect tree health while twig and stem galls are solid, woody masses that can girdle branches and make them droop from weight. Twig and stem galls take two or more years to develop, beginning as a blister-like leaf gall appearing along larger leaf veins. These blisters then metamorphose into a knotty twig gall in mid-summer maturing fully in one or two years with the emergence of the adult insect in spring. Each gall insect forms a gall of a particular size, shape and color, and entirely different from the galls of other species. 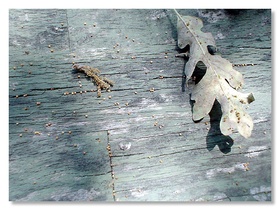 Jumping oak galls seem to drop like rain around late summer, infesting your picnic salsa with little jumping beans! In Davis, our Valley Oaks are commonly afflicted with jumping oak gall caused by a small cynipid wasp species (Neuroteras saltatorius). These are the tiny "jumping beans" you will notice falling on your picnic table under the big oak tree. These round pinhead-sized yellow or brown seed-like galls typically appear first on the leaves, falling off when the lone inhabitant is mature; the wasp's activity makes the gall "jump" several inches off the ground. It is believed that the larvae hop around to locate a soil crack in which to hide and pupate before maturing to adulthood and chewing its way out of the gall. The wasps themselves are dark and so tiny that you'll probably never see them — they are harmless to people. 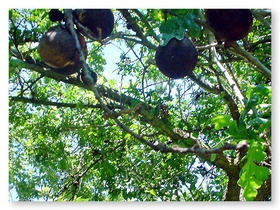 This local valley oak is profuse with oak apples formed by gall wasps. Besides the jumping oak gall, another familiar gall seen on the deciduous valley oaks is the common oak apple — a large gall up to three inches in diameter containing one or more tiny cynipid wasp larva (Andricus californicus). Other galls look like pink stars, reddish cones, tan wheels, and even a tiny loaf of bread. Once a gall has formed, other insects may inhabit or invade galls during or after the residency of the gallwasp — some are parasites of the gallwasps while others use the gall or materials left behind by inhabitants as a food source.

In California, most insect caused galls are not harmful to the plant, resulting in no serious permanent injury. Good thing, because it is very difficult to prevent these wasps from forming galls, though pruning of infested twigs may reduce the problem on light infestations.

Oak galls can also be used in natural dyeing, a rich golden tan color can be achieved on silk fibers using just oak galls. The tanins act as a natural mordant or fixative in the dyeing process. They are also a fixative in medieval iron based inks.

For a listing of other potentially disease-afflicted plants found growing in Davis, visit our Town Flora, or check out our Town Wildlife page to learn about other types of creepy crawly creatures.