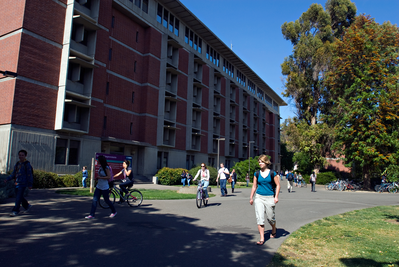 Majoring in Political Science will earn you a B.A. degree that you can use to pursue professional degrees or positions in law, business, journalism, or government. "PoliSci" students, as they are called, study government at all stages, but majors choose a track to focus on specific subfields such as American politics, comparative government and politics, international relations, or political theory.

At the graduate level, a degree will prepare you for academic research. Coursework at the graduate level includes statistics, mathematical modeling, and research design in addition to the substantive material in a student's subfield: American politics, comparative politics, international relations, political theory, or political methodology. The normative time to graduation for a Ph.D. is five years, and there is no way to apply for a Master of Arts as the terminal degree.

All POL and IR students must take POL 51— the Scientific Study of Politics. The exact way this course is taught will vary by the instructor. Students tend to dislike the course because it involves statistics applied to political data. The class may involve problem sets involving various data, paper assignments, and a midterm/final. Typically, the TA you have will determine the difficulty of the class. However, this class is important because it introduces concepts such as regression coefficients and statistical significance. Most IR courses build off material taught in POL 51, so you may want to keep your notes.

Student Perceptions of Political Science Professors: Zeev Maoz: He teaches International Politics courses such as Middle East Politics and The Arab-Israeli Conflict. He is well-known and respected in the academic field. However, if you take his undergraduate courses be prepared to read a lot. He frequently assigns 50-100 pages of reading per class. His exams require you to cite readings as evidence in your blue book. The essays are hard and long, but you have plenty of time to work on them. If you get an A in his class, he will write very good recomendations.

James Adams: He teaches Comparative Politics and specializes in British Politics, which is offered nearly every qaurter. Occasionally he will teach German or French Politics. He is a great lecturer who adores baseball (he will include references to the sport and his SF Giants at any opportunity). He loves audience participation. If you take any of his classes DO NOT BUY THE BOOKS. Go to class and take notes because everything is from lecture, and each week you will get a very organized outline with subpoints. He'll say something like '...and in subpoint 1f, you can write 'the Iron Cage of Democracy, is (blank) COMA (blank) Period.' - Very concise! Exams are graded by TA and the only assignments are midterm (40% and 60% final plus the extra credit surveys that the department offers every quarter).

John Gates: A very knowlegable professor who teaches the POL 150-154 series (Judicial & Court Politics). He often is interviewed by the California Aggie whenever the Supreme Court has an important ruling or on the implications of Presidential appointments. POL 150, while not a specific POL major required course, is a prerequisite for the other three courses in the series. He has recently changed the structure of POL 150 and is always responsive to student comments. He has a good sense of humor and gives a Constitution Quiz at the start of the quarter. You will be suprised to learn what the Constitution actually says and does not say. If you don't do so well, it's alright because you get another chance to retake it (lowest score dropped; test is 10%) and almost everyone does much better the 2nd time. In POL 150 and in his other courses, often you will read a series of court decisions in a particular subject or topic of judicial theory. He will give short reading quizzes, which are easy if you do the work. The midterm and final are mostly based on lecture (although courses such as 152 have emphasis on reading and include a paper). POL 150 now includes a fun simulation according to students who took his course in the 2010-2011 academic year. He may seem formal, but his slides are useful and outside of class is very approachable. Take POL 150 and you will learn a lot about the Consitution, the evolution of the court, and most importantly the myth of "liberal actvist judges" or "conservative restraint" in the political sense.

Gabriella Montinola (POL 179 Special Study in Comparative Politics; POL 148 East Asia Politics..A(China) & B (Southeast Asia); Montinola teaches her 148A/B courses very differently than her 179 course. In her East Asian Comparative courses, she teaches it like a history course (going from a set point in time to the present day). She will focus on the evolution of the political institutions and she has lots of notes. In her Chinese Politics course it goes from the end of the Imperial Dynasty to the present and it also features lectures at the end on Taiwanese Politics and the autonomous regions of the PRC (Tibet, Xingjiang, Hong Kong, and Macau). One downside is that she goes very fast and often there is not enough time to take full notes unless you start writing immediately. A positive (or negative) is that at the very beginning of each class she will briefly cover what was discussed in the previous lecture. Take notes during the movies becuase you may face an easy bonus question on the exams. You write one essay for her Chinese Politics class. Everything is graded by the TA.

POL 179 is a different class. It is an elective that can be taken twice for credit. The topic depends on the instructor, hence the vague course title. When Montinola teaches 179, the topic is always corruption (she said so herself when asked). This course is more like POL 51, so it is recommended that you take POL 51 first. Each class will be spent analyzing factors that influence corruption and interpreting the data on her slides. There is 1 midterm and 1 final, plus a paper (or assignment) which is not that difficult. This is her area of expertise, but if you aren't into numbers or prefer focusing on a specific country or region, take another comparative course. 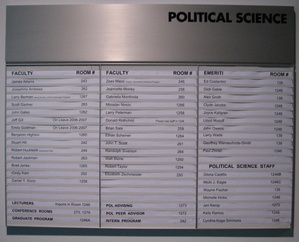 The office directory in Spring 2007 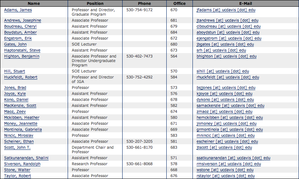 The office directory in Fall 2011

2009-01-26 22:37:33   You can come for drop in apointments for Political Science majors in the International Relations Building next door. There is usually not much more than a 5 or 10 mins max waiting time for advising (and there are little games or material you can read while you wait). The Undergraduate Advisor is Jackie Teeple. She's very helpful and daily sends out emails of internships and career info to Political Science students. —BryceH