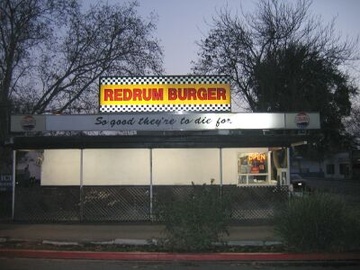 Redrum Burger, formerly named and often still called Murder Burger (see below), serves up a wide selection of food, and is a Davis tradition. Prices generally aren't cheap for a burger joint/diner, but you get what you pay for in quantity, atmosphere and uniqueness. They have all sorts of traditional burgers, along with ​Elk, Bison and Ostrich, huge (1 lb) burgers called 'THE AGGIEPACK Annihialator, Onion Rings the size of DONUTS, fried calamari, 30 different flavors of Milkshakes and much more. They can make any shake you can imagine, and put cheese on everything. It is open on most holidays.

One truly amazing item they sell is the ZOOM, yes ZOOM! It stands for Zucchini Onion Rings and Mushrooms. All heavily breaded and deep fried. Can you feel your heart tensing at the thought of that onslaught of healthy stuff? If you do get a ZOOM, don't plan on finishing anything you order, this thing is HUGE. Plan ahead a place to nap the heavy meal away. You may have bad dreams though and/or need to change clothes (its still worth it!).

The enormous one pound burger is served only as a combo, with fries and a drink. It's about $11.50. 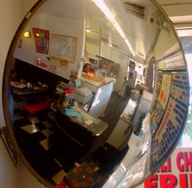 The employees are somewhat punkish. So much so that it's often said that "there seems to be a requirement to have at least two tattoos to work there." The employees are notorious for being somewhat 'alternative,' so much so that the back of the recent Redrum shirts read "Burgers with Attitude" — a possible play on the crust-punk atmosphere of the restaurant. Service is often slow, but they are happy to have you call ahead — and this will cut your waiting time.

One of Davis' oldest fast food restaurants, Sno-White, was once here. It later became Ju-Ju's. 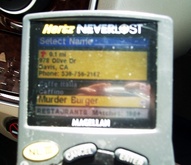 The GPS that Hertz provides still lists them as Murder Burger

Many people still refer to it as "Murder Burger." Under the old name, Murder Burger was a Northern California legend established in 1986 at the Davis location. While Davisites never seemed to have any objections to the name, customers and community members in Rocklin, site of the one-year old second location, objected to the original name and slogan as they chowed down on giant meat patties. Additionally, when the franchise was sold to new owners, the rights to the name "Murder Burger" were not. In May 2001, after being unable to come to an agreement with the original owner over the dollar value of the name, the establishment officially changed its name to "Redrum Burger". As for the name change, 'redrum' is 'murder' spelled backward, as highlighted in the book/movie The Shining, selected by owner Jim Edlund from over 7,000 names submitted in a contest to rename the business. The winning name was submitted by four clever individuals, so a drawing declared Shaun Curtis of Cupertino winner of $1,000 and a meal a day for life. Other names making it to the semifinals included Patty Shack, Mr. Goodburger, Grill & Chill, Moo-der Burger and Bird-o-Burger. People from six states, Canada, and Mexico submitted names.

The Rocklin location is long gone, so one would suppose that the community's objections no longer mean much.

The establishment may soon be changing its name back to the original "Murder Burger," having reached some sort of trademark agreement (details unclear, Jan. 2006). In fact, they often answer the phone as "Murder Burger." This website might offer some clues...

In the early 1990's, the Murder Burger billboard was vandalized and the plywood hamburger removed. The burger was recovered, however, and it was safely displayed in the editorial office of Davis High School's newspaper, The HUB.

On April 6, 2011, Scott N. Johnson, who is an attorney who uses a wheelchair, filed an ADA lawsuit in U.S. District Court in Sacramento, claiming he was unable to dine at Redrum Burger because the doors, tables, service counter and restrooms are not accessible to wheelchairs. Johnson also noted the lack of disabled parking spaces. Owner Jim Edlund said he remembers receiving a warning letter from Johnson, but believed his building was exempt because it was built in 1949.

Johnson has sued more than 1,500 businesses under the Americans with Disabilities Act and threatened many more. In an interview the previous year, Johnson defended his activity, claiming to be an agent of change for the rights of the disabled. He typically settles the cases out of court and with no actual improvement for the handicapped in exchange for a personal payment between $4,000 and $6,000. He hires interns to photograph businesses, and will often launch a few dozen "cases" in a single day, hammering every business along a commercial street for a payout with the threat of legal action, often targeting small and family owned businesses who are more likely to quickly agree to avoid a legal battle. At least one woman who was targeted believes he is now targeting herself and similar businesses because they are run by non-citizens who are scared to be brought to court. She stated that in her case, she did not have the amount he demanded, so he simply accepted all the money she could give him and moved on. A similar ADA lawsuit in 2009 filed by a different plaintiff against Sacramento's Squeeze Inn hamburger restaurant led the owner to abandon his tiny landmark location and move to a larger building around the corner. Sacramento attorney Michael Welch says he will represent Redrum Burger for free against what he called "legalized extortion."

2011-01-25 13:56:57   This place is so disgusting. I ordered the regular 1/2 lb burger and it looked like it was microwaved. The patty was cold only parts were warmed up. Salad and tomatoes were smashed and soggy. The large seasoned fries were really soggy and tasteless, also microwaved. They might be racist as well giving us that trash. We threw it away and went to IN n Out where its clean and fresh. PLEASE STAY AWAY FROM THIS PLACE. They only serve the regulars the best and fresh food not to minorities. I will post a link with pictures of my burger soon... stay tuned. —melissatobias

2011-02-07 23:13:10   Went there for the first time yesterday. Had an Ostrich Burger and a Bison Burger. They might have been the best burgers I'd ever tasted no joke. It's really expensive but the burgers were soooooo goood! —JonathanDona

I think there was a place called the Snowwhite Drivein? -NickSchmalenberger

2011-03-03 15:48:20   I went today and ordered 2 burgers to go. I was told it will be a 15 min wait. After 20 min, they said another 5. One would assume that this food was at least warm. Not really. The meat was completely cold!!! Not even warm. I have no idea how this place can get the rave reviews I have seen. My experience was bad service and unfortunately bad food. —anamaria2

Unfortunately, location and aesthetics have a lot of influence on how people consider food pricing. —BenLee

2013-02-10 23:22:07   Redrum burger has had its ups and downs. I stopped going there 4 years ago, due to slow service, but I decided to try it again in the summer of 2012. Things have really picked up around there. The food is good. Employees are nice. The place is generally clean and I haven't had a bad experience there in a long time. For those of you saying its super expensive, order the mini corn dogs. Its basically a huge basket of mini corn dogs and fries, only $5.00 —WhatWhat

2014-02-21 16:15:33   Truly a horrible restaurant in general and an exceptionally bad burger joint in specific. The dude behind the counter was surly and acted annoyed as he took down my order. Even though I was one of maybe three people there, my food took a good 45 minutes to come out. While I was waiting, I had the pleasure of watching two giant cockroaches battling on the table in front of me. When the food finally did arrive at my table I was dismayed to discover it was luke-warm at best and looked suspiciously like an idiot toddler had prepared it.

Just go to In-n-Out right across the street or Tommy J's on G street. Tradition alone does not justify this POS burger joint's continued existence. —HarrisonNoah

1. Apparently they aren't serving ostrich burgers anymore. This I learned after me and a friend went there today (8/22/12) with the person at the register informing us that it had something to do with the price of ostrich going up. The burger is still listed on their take home menu, but they say they will be taking it off soon..