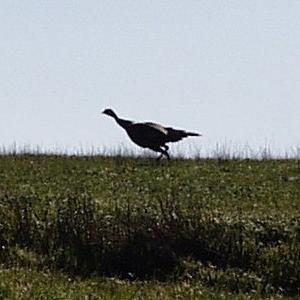 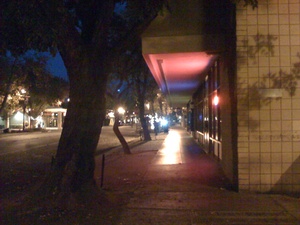 Thanksgiving evening in Davis. The streets are nearly deserted.

Thanksgiving Day is an autumn harvest festival and celebration of gratitude. In the U.S. it's a holiday celebrated on the fourth Thursday of November. Canada celebrates Thanksgiving too, but on the second Monday of October. Harvest festivals naturally are centered around food, which typically is a large meal eaten in the late afternoon. In the U.S. this traditionally includes a large roast turkey (perhaps purchased at Branigan's Turkey Farm) or vegetarian substitute (sometimes Tofurkey, but usually other dishes) with stuffing, ham, candied yams or sweet potatoes, mashed potatoes with gravy, squash, green beans, cornbread, cranberry sauce, and regional items. Dessert is often a pie (pumpkin, apple, or pecan).

Thanksgiving is always a chance to stuff yourself, which, depending on which side of the poverty line you live on, is either a blessing or a curse. In the spirit of giving, Good Samaritan organizations often offer free community meals. American style buffets usually have special Thanksgiving dinners. If you want to burn off some calories first, you can participate in the annual Turkey Trot.

Or if your sentiments lie with the Native Americans who previously lived on this land, then you probably want to support the National Day of Mourning. Of course, Thanksgiving is also the only major holiday that specifically celebrates a bunch of people from different cultures managing to get along, however short lived it was.

Afterwards, you can kick back and watch football or the Macy's Thanksgiving Day Parade on TV. Don't forget that the next day is Buy Nothing Day.

Davis is typically very quiet on Thanksgiving. Most of the students go out of town to be with their families (for freshmen, this may result in the Turkey dump), and the campus is closed. Most stores and restaurants do not open on Thanksgiving day, although a few stay open at least until the early evening.

Thanksgiving weekend nearly always coincides with the descent of very thick fog upon Davis. Driving in this fog can be very hazardous. The fog is also a major source of flight delays at Sacramento International Airport. Please plan your Thanksgiving weekend travel accordingly.

Unitrans runs a special Airport Shuttle the day before Thanksgiving, with a direct bus departing to SMF on the hour as a supplement to the Yolobus 42A. It should be noted that this service does not run on the Sunday after Thanksgiving (but you can still use Yolobus 42B to get back to Davis).

Eating and Shopping On Holidays: