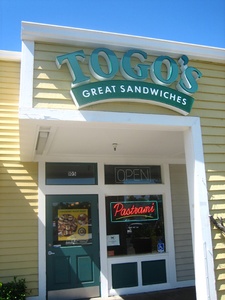 Togo's eateries offer fantastic sandwiches, soups and salads. Try a 24 on white with wasabi sauce. In addition they offer catering services in the form of tray preparation.

Togo's sandwiches are favored by many in Davis and are considered superior and very tasty. 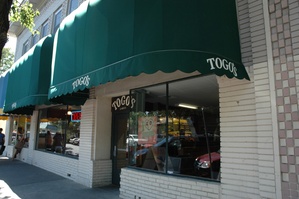 There used to be a second location Downtown, on 715 2nd Street. It closed permanently in June 2008 and was then occupied by Tacos and Beer, Bombay Dreams which served quite delicious Indian/Nepalese meals, and eventually Preethi Indian Cuisine.

2005-01-20 21:40:28   Interestingly, when the fire happened downtown a few years back, the downtown Togo's closed for a bit. Subway is cheaper, though. —RohiniJasavala

2006-08-26 15:23:51   At the Marketplace location, you better speak audibly and clearly and tell her that you want the sandwich exactly how it's described in the menu. If you wanted produce, you'd ask the worker for them. If she adds them anyway, she should have the decency to remake the sandwich from scratch rather than merely picking out the majority of the produce. I don't know how many times I repeated "as it's described in the menu" just to get a half-assed sandwich. Oh. And if she interrupts you while you're correcting her with "I'll remake it," she doesn't actually mean that she'll listened to you. She'll still make the sandwich however she wants it. Not as you want it. Unbelievable. —LiRic

2007-01-11 12:53:50   The one Downtown has taken a downward spiral over the last year or so. I have worked nearby for about four years now and I have to say the last couple times I have been in the service was horrible, the place was dirty and the employee's were rude. This has happened a couple of times over 8 months or so. I wouldn't normally hate on a place so bad. —JarrettNoble

2007-07-19 13:35:17   Togo's is great better than anyother sandwich shop in my opinion i have tried all the rest but the salami sandwich wins me over the meatball is good like the breads —dickjones

2007-11-21 19:32:31   I love the Marketplace one. There are some people that make my sandwich perfect and there are some that don't and I usually try to get the women, they for some reason make the sandwiches perfect. —MustangLisa05

i wish they served coke instead of pepsi... —herzchen

2008-03-21 18:29:03   The Downtown store adds a Tip line onto your receipt when you pay by credit card and the Marketplace one does not. Just a little pet peeve of mine. —JonBranch

2008-04-09 10:01:30   I ordered a large soup at the downtown location, and it seems like they screwed me over. They put the soup in a white dish (for people who eat in the restaurant) and it really didn't seem like a large. Plus I ordered bread with it, and they barely gave me 3 inches of bread, which is nothing. I used to work at a togo's, and I know that 3 inches of bread should come with a SMALL soup, not a LARGE. The employee who helped me seemed pissed that she had to put on gloves and give me bread, even though you're supposed to offer crackers or bread with an order of soup. Another employee just stood and stared the entire time, which was annoying. BUT, on the bright side, a male employee offered to give me a water cup when I did not buy a drink. He has done that consistently (I have been to this location at least 3 times), and that shows that someone there knows about customer service.

At the marketplace location, on the other hand, I am given the right portion of soup and bread. When I ordered an endless combo there one day (half a sandwich and a small soup), I was given almost a regular sized sandwich. This isn't consistent though because my boyfriend ordered the same thing and he received a half sandwich.

Basically, I'd rather go to the marketplace location!

2008-04-18 12:29:13   Togo's has good quality sandwiches. My recommendation for a good sandwich is hot roast beef on white bread (it's softer than their wheat) with avocado. From their salads, I like the Asian salad the best (it has a peanut-sesame type dressing). —YupYup

2008-06-29 11:40:25   I went to buy a sandwich from the downtown location, but it appears to have shut its door permanently. The sign on the door says to try the one on West Covell and thanks people for their years of patronage, so I assume they've shut down for good. —Oceaniax

2008-08-24 10:38:13   Thanks goodness for the Davis Wiki. I was about to trek over to the downtown Togos and only got on here to check their hours. It's still listed as open on the togos.com site too! Kudos to you all for keeping the Wiki so up to date. You just saved me a long walk and an even bigger disappointment. —MichaelMacIntosh

2008-12-04 09:45:31   Love the Marketplace location. Fast, friendly service and only the occasional smile of helplessness when I tell them I only want the meat, cheese, and lettuce on my sandwich. —AbbYu

2011-09-19 02:21:17   This review is in regard to the Marketplace location, as the downtown location is closed. Service both times I've been to this one has been pretty slow; only one person out of the three (or more) employees there were actively making things. Both times I've been here, the resulting food was delicious and well worth the extra price over Subway. They aren't so skimpy, and the ingredients are better. While slower, the employees seem much more cheerful (especially when compared to the Subway at University Mall, where they look miserable 90% of the time). I feel more full from a 6" sub from Togo's than from a 12" sub at Subway. I'll be frequenting this place more often. —KurtSassenrath