Out of every city this side of the country, the City of Davis was chosen to host the First-Ever West Coast AAU Junior Olympic Games in 2006. In 2007, Davis was once again chosen to host this important event. Up to 2,500 young athletes and an estimated 5,500 family, friends, coaches, etc. will be attending to participate in nine different sporting events, including: Baseball, Basketball, Jump Rope, Field Hockey, Flag Football, Wrestling, Diving, and Golf.

Besides learning, improving, and competing, participants will also be able to enjoy themselves at the Athlete's Village, which will include musical performances, fashion shows, games, activities, food, souvenirs, and dancing.

Since up to 8000 people are expected to attend the games, Many volunteers will be needed to help make this event a success. Work shifts will run from June 22, 2007 to July 1, 2007. Tasks include assisting with the Athlete Village, Concierge Desk, Event Surveys, Hospitality, Merchandising, and Sports Competitions.

Those interested in volunteering for the Summer 2007 games may use the Online Registration Page. The new online system now allows individuals as well as groups to register.

Any volunteer questions may be directed to [email protected] 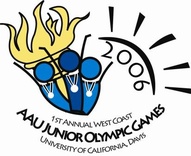 Founded in 1888, the Amateur Athletic Union (AAU) has become one of the largest non-profit volunteer sports organizations in the country with over 500,000 members and 60,000 volunteers nationwide. The first AAU Junior Olympic Games was held in 1967 in Washington, DC and attracted 523 athletes. For almost the past forty years, the games were held in various cities on the east coast... and the event has grown. The 2005 games in New Orleans saw 18,501 athletes and 3,782 coaches participate.

So the AAU thought... why not try this on the West Coast?

Three years ago, UC Davis Campus Events began talking with the AAU, and together they agreed to create the first annual West Coast AAU Junior Olympic Games. This inaugural event will bring up to 2,500 athletes to the Davis/Woodland area for six days of competition and fun... and will start a new legacy of its own.

Hundreds of Amateur Athletic Union athletes have gone on to compete in the Olympics or to play professional sports, including: