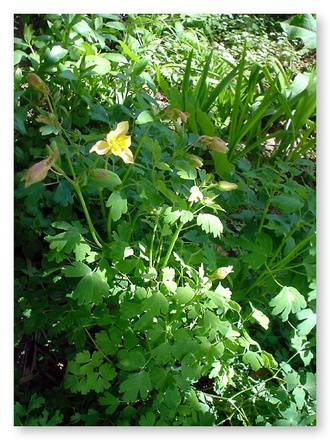 Western Columbines often grow wild in locations like this.

The Western Columbine (Aquilegia formosa) is native from Alaska to California, and east to western Montana and Utah. This woodland perennial produces two foot stems with two inch red-orange and yellow flowers of stout, straight red spurs, red sepals and yellow petals. It has blue green divided leaves that give the plant a fern like appearance. Although delicate looking, it is quite hardy and easy to grow — western columbine self-seeds quite freely, and small birds love the seeds while hummingbirds find it a great source of nectar. As an edible, the flowers are rich in nectar and make a very attractive addition to mixed salads; other parts of the plant have toxic properties and should only be used with extreme care.

A "Blue Jay" cultivar in a flower bed.

Widely distributed in habitats ranging from the coast to the coastal mountains, columbines appreciate moist woodland scrub; in Davis, this can be replicated by underplanting in the dappled shade of oaks. Expect plants to die back in the fall/winter and return again in late winter with blooms from spring to early summer. Generally, western columbines are a short-lived species, often dying out after a couple years and highly likely to hybridize with other members of the genus. Leaf miners riddle the leaves in spring so when plants finish flowering cut down to the ground. New growth should not be bothered since the larvae are gone by the time the second new growth begins. Columbines are also a greedy plant, inhibiting the growth of nearby plants, especially legumes.