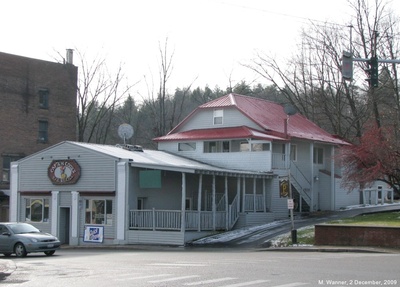 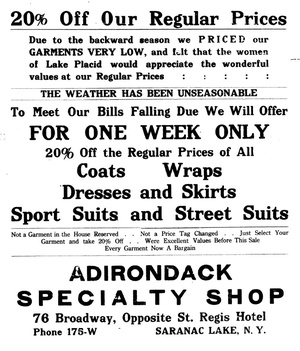 Lake Placid News, May 5, 1922Other information: In the 1950s it was the home of Nick Tartaris and his wife, who operated Nick's Electric Store ("Dependable Repairs on radios and appliances"). Tartaris apparently owned the building at that time.

Fire, which, started at 8:30 in the evening at No. 76 Broadway. Saranac Lake, assumed threatening proportions for a time. The building was occupied by the Adirondack Specialty Company and the New York Bargain House. Quick action on the part of the firemen, who stretched a line of hose into the basement, prevented the fire from spreading, although some damage was done by smoke and water. The same day a burning barn threatened buildings in the entire neighborhood, but this also was extinguished by the firemen.

Purchase of the modern business property at 76 Broadway by Nicholas Tartaris from Mrs. Phelps Harding of Rochester was completed Saturday evening. Mr. Tartaris is proprietor of Nick's Radio and Refrigeration Service, now located at 42 Broadway.

The retail and service business now operating under the name of Nick's Radio and Refrigeration Service will be moved to the newly purchased building this month, and it is expected that the new quarters will be open for business by Oct. 1.

Mr. Tartaris came to Saranac Lake six years ago, and at that time started a radio service which was conducted from his home. Four years ago he moved the business to the Broadway location, and since then it has steadily grown to its present proportions.

The business has the agencies for the Zenith radio, as well as the Stromberg-Carlson radio, the Frigidaire line of domestic and commercial refrigeration, Maytag washers and ironers, Hotpoint and other domestic utensils, Coleman Space heaters, Master mixers and other electric appliances.

The business is known as one from which patrons secure excellent and uniform service, and its growth has been due chiefly to the ability of Mr. Tartaris to uphold these and other high business standards.

Nick's new radio and refrigeration display room in Broadway, opposite the St. Regis hotel, is as artistic and pleasant a commercial sales room as one is likely to run across in towns much larger than Saranac Lake. If you haven't seen it, go in some time. Everything electrical for the home, including the latest refrigeration units.