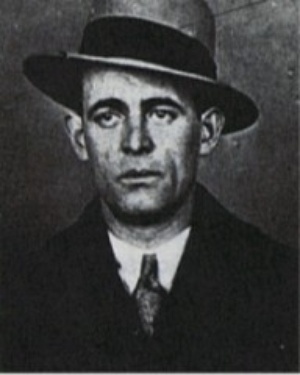 Malone Farmer 12-24-1919. Courtesy of the Northern New York Library Network Only fifty-six miles from the Canadian border, Saranac Lake saw its share of bootlegging operations during Prohibition. There were seven stills in town, including one operated by Pietro Tanzini, who disappeared on December 17, 1930; his young wife, Augusta, was found dead two months later.  Others include

Isaac Stern, whose home was raided by prohibition agents in November, 1925

"POTATOES" PROVED TO BE BOTTLES OF "SCOTCH"

Two loaded automobiles were seized and four men were taken into custody at about 1:30 on Sunday morning by Patrolmen Julius St. Denis and John Sweeney, of the Plattsburg city police force, who were watching for smugglers.

The two officers had been for some time watching the road leading into the city, in cooperation with U. S. Custom officials, who were at the same time engaged in watching other roads.

There is a sharp turn leading from the Beekmanton road into Boynton avenue and the leading auto was ditched by the chauffeur in trying to make the turn. A moment afterwards the second car made the turn and stopped to assist the driver of the first. The two policemen were concealed at the next turn a few yards away at the corner of Beekman and Boynton avenue. When they saw the car shoot out of the Beekmantown road they ran to the center of the highway just at the moment the car ran into the ditch.

St. Denis and Sweeney ran forward and reached the scene of the accident just as the second car stopped. They asked the leader of the men what was in the bags with which each car was piled high. He said that he had bought some potatoes in the country and was taking them home.

This explanation did not satisfy the two officers who opened some of the bags and found that each of the nineteen bags was filled with bottles. They then arrested the men.

The officers notified U. S. Commissioner Gilliland and sent Bert Baker's taxi to the road near the Sunrise Hotel where Deputy U. S. Marshal James Murray and Customs Officer Day were stationed, to bring the latter officers to town to take charge of the case.

When the U. S. officials arrived they took a look at the contents of the bags and found that the bottles were labeled "Scotch" and "Imperial" rye.

At about 2:30 a. m., the men were brought before Commissioner Gilliland. The leader of the party was William Hearn of Saranac Lake. With him was a chauffeur named Miner. In the second car was William Gaston, a chauffeur, and Edward Stack, who disclaimed any knowledge of the affair, saying that he had accompanied the party for the ride and did not know what they were about.

Commissioner Gilliland held Hearn in $2,000 bail and the other three in $500 each for appearance in his court at 2 o'clock Monday afternoon. Bail was furnished and they were released until that time.

The cars and contents were taken in charge by Officer Murray. One of the cars wag a Reo and the other a Studebaker touring car. A brother of Hearn at Saranac Lake was telephoned to and it was said that the man arrested at Plattsburg had borrowed the car for the ostensible purpose of going to Malone.

Hearn is said to have admitted that the contents of the bags had cost him $2,000.

The four men were arraigned before Commissioner Gilliland Monday afternoon, the case being adjourned until Tuesday morning. Hearn seemed to be anxious to shield his three companions, stating that they knew nothing of the trip they were going on and thought they were after potatoes. It is to be imagined that these same three companions thought they were handling potatoes during the midnight hours—they couldn't see or feel very well. We wonder if Hearn thinks that such "bull" as this fools anyone.

Special Agent Day of the U. S. Customs Service was the only witness sworn Tuesday morning when the examination was continued. Certain papers taken from Hearn by Day on the night of arrest were asked for by the plaintiff's attorney, E, C. Gordon. Mr. Day said that he would give the papers to Assistant District Attorney Davern and did so. The latter after looking over them handed them to Mr. Gordon who said that he would place them in evidence. After Mr. Day's examination the officers went to the Customs House with Deputy U. S. Marshal James Murray, and the alleged liquor was turned over to the customs officers. An adjournment was then taken until Wednesday.

Federal prohibition agents at Saranac Lake raided the American-Italian Garden restaurant and after confiscating alleged liquor arrested Jack Tanzini. Tanzini was arraigned before United States Commissioner George A. Utting and released on $1,000 ball. Dry agents claim this is the second raid to have been made at the restaurant within two months.

Howard G. Dickinson of Saranac Lake was arraigned before Commissioner G. S. Bixby yesterday on charges of transporting and possessing 1104 pint bottles of Canadian ale and 36 quart bottles of wine.

Dickinson waived examination for the federal grand jury and bail was fixed at $2,000. In default, he was committed to the Clinton county jail.