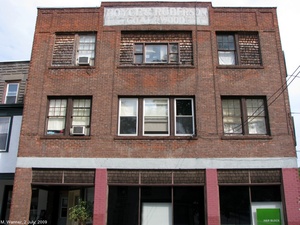 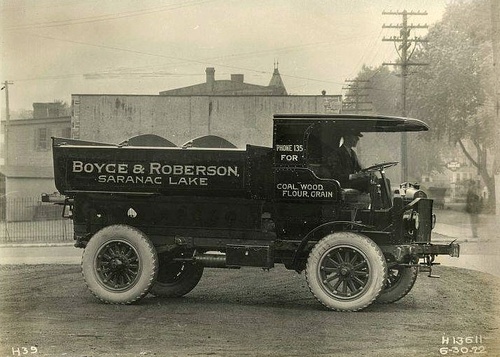 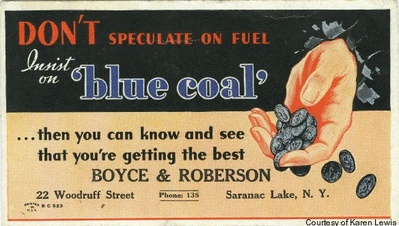 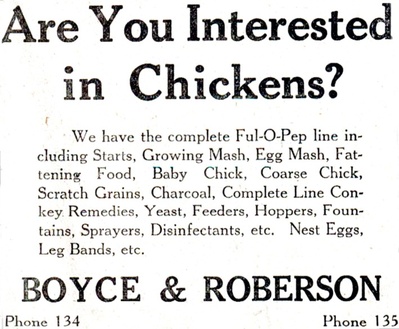 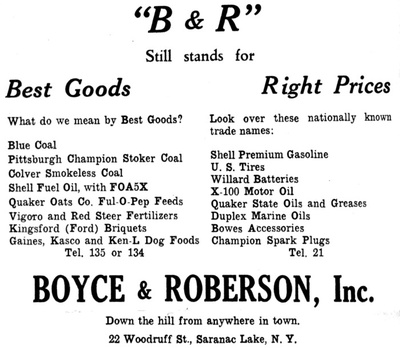 Adirondack Enterprise, March 18, 1953 Boyce and Roberson established in 1909, was a Saranac Lake firm that dealt in ice, coal and wood, for heat, with offices located at 22 Woodruff Street, (originally at the corner of Broadway and Woodruff Street). The owners were Willard Boyce and Charles F. Roberson. They also owned an ice house at 45 East Pine Street on Moody Pond, and yards at the north end of the village. Fuel oil was added in later years, and then propane, gasoline, lawn and garden supplies and a service station. Boyce died in 1928. When Charles Roberson retired in 1958, the firm was taken over by his son, David Roberson and a partner, Walter Hammond.

The Boyce and Roberson Annex at 22 Church StreetDecember 11, 1958, saw Boyce and Roberson's substantial Tudor Revival-style building on the northeast corner of Church Street and Woodruff streets go up in flames. The fire moved incredibly fast, engulfing the upper floor in five minutes; drums of fluid in the ground-floor service station began to explode. According to Jim Griebsch, his sister, Nancy, was attending Dorothy Sargeant's dance class in the cavernous second floor space, formerly a bowling alley, when the fire began. When Nancy didn't return promptly to the family home on Helen Hill, a frightened Marion Griebsch sent Nancy's big brother Jim to find her. Brother John, 14, had gone down from his paper route with his constant accessory, his camera, shortly after the alarm. This was an exciting photo opportunity, as he had just started taking pictures a year or two before. John found Nancy almost immediately, and she stayed with him and safely watched the fire from Church Street hill. John took some stunning photos that evening and sold them to the Enterprise. In those days before cell phones, Nancy earned a loving scolding from her mother for not checking in at home! The first floor of the building still stands, housing Stratton Plumbing and Heating and G.O. Automotive, a one-story shadow of its architecturally handsome former self. 1