A brick at the Saranac Laboratory has been dedicated in the name of Christian Sporck by his daughter, Ruth Sporck Levy. 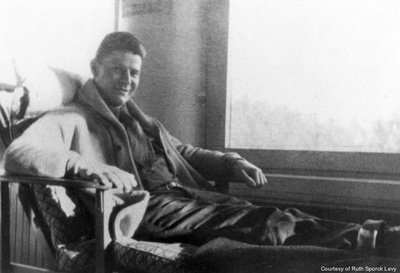 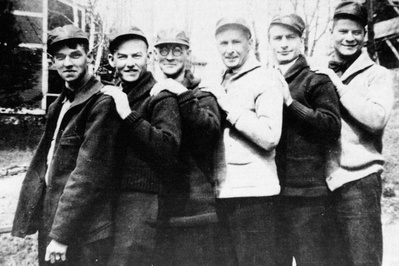 Christian Sporck contracted tuberculosis and came to Saranac Lake in 1920. He cured at the Reception Hospital and later under the care of Dr. Hugh Kinghorn. The family remained in Saranac Lake, operating a grocery store on River Street and then a motel on Lake Flower Avenue.

Sporck's store was on River Street until 1928; the site which became the public bathing beach at Prescott Park. The family lived at 66 Shepard Avenue with my grandmother, remembered fondly by neighborhood children as "Granny Sporck". Her real name was Walburga Roeder; she was Caroline Sporck's stepmother. Caroline Sporck was a nanny for Dr. Hugh Kinghorn's daughter, Nora, while Christian was curing.

After the store closed they moved to 23 Lake Flower Avenue, a three-story house with a Mansard roof, where they ran a gas station and a taxi service. Ruth Sporck remembers that most of his clients were patients at Trudeau Sanatorium who wanted rides to the Belvedere Hotel for dinner, and that the patients particularly liked to ride with her father because he shared the same experiences fighting the disease. "Granny Sporck" became a housekeeper for Cedric Smith, also a tubercular patient who lived at Turtle Pond. The Sporcks rented out the upper floors of the house; one of the tenants was John Schmidt who worked at the Trudeau lab.

Christian and his wife Caroline lived on Birch Street until 1979 when they moved to Los Altos, California to be near their sons, Christian and Charles. Caroline died in 1981 and Christian in 1985 in California. They are both buried in North Elba Cemetery in Lake Placid. Christian's two sisters operated a cure cottage at 41 Park Avenue.

Present also were their elder son and wife, Dr. and Mrs. Christian R. Sporck of Cupertino, Calif., and their daughter, Ruth, and husband, Dr. Arthur S. Levy of Binghamton.

They have ten grandchildren all of whom were present—They are: Frederick of Burlington, Vt., David of Houston, Tex., and Nicholas of Cupertino, children of their elder son; Charles, Jonathan, Christian, and Jane, all of Los Altos and vicinity, children of their second son; and Benjamin, Nathaniel, and Caroline Levy of Binghamton children of their daughter.

Under the medical care of the late Dr. Hugh M. Kinghorn, Mr Sporck recovered his health and, except for short trips, was destined never again during his active working life to leave the Adirondacks.

Mr. and Mrs. Sporck operated a number of small enterprises in Saranac Lake in a way characteristic of them, essentially as partners. These efforts included a grocery store which was located at the site of the old bathhouse at the Prescott Park Bathing Beach; a taxi business; gas stations; and they were landlords of rental properties. Their most recent activity was running a motel at 23 Lake Flower Avenue. They retired after the sale of their motel in 1968.

Their three children were brought up in Saranac Lake. Each graduated from Saranac Lake High School and Cornell University.

The Sporcks do not wish to be sententious about their long and happy life. They say that for a long life it helps to come from sturdy stock; for a happy life, a stable marriage based on partnership is a blessing.