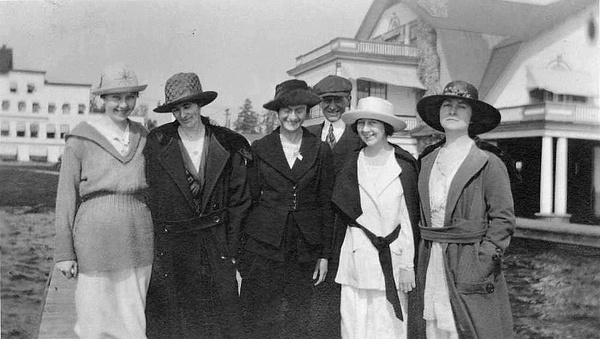 Ethel Walker is 2nd from right. (undated)
Taken from the dock at Paul Smith's Hotel. The hotel and casino building (right) are in the background.
Courtesy of Paul Smiths College archives.Born: August 6, 1890

Ethel Nickerson Walker was a registered nurse who operated the house at 67 Park Avenue as the Walker Cottage. She moved to Saranac Lake in 1919. She moved to Maine in 1972, but by 1974, she was back in Saranac Lake, moving from 1 Riverside Drive to the DeChantal Apartments.

Alfred Walker is listed as living at 67 Park Avenue from 1925, and Ethel first appears at that address in 1933, and continued there until at least 1954.

See Johan A. Olsen, for a letter sent from a former patient. 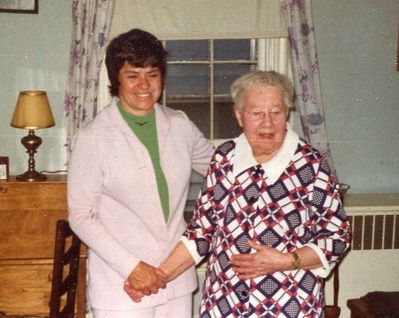 Mrs. Ethel Walker of 1 Riverside Drive, who has lived here since 1913, is moving to Bucksport, Me. where she will make her home with a longtime friend. Mrs. Walker, a registered nurse, originally from Bangor, graduated from the Massachusetts General Hospital in 1917 and came here with a sister who was ill.

SARANAC LAKE - Mrs. Ethel N. Walker, 94, of 20 Church Street, died Thursday evening, Sept. 20, at Uihlein Mercy Center in Lake Placid. She had been a resident of the center since 1979. 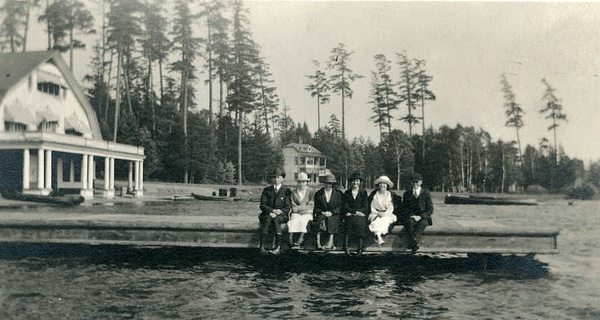 Ethel Walker and friends. Walker is second from right. (undated, possibly 1914)
The group is sitting on a u-shaped dock in front of the hotel. Ethel and her companions are on the eastern extension, and the photographer is on the western extension.  The building behind the group is the Jones Cottage, also listed as Cottage #1 in hotel era maps (see Paul Smith's Cottages).
Courtesy of Paul Smiths College archives.She was born Aug. 6, 1890, in Brewer, Maine, the daughter of Arthur and Annie (Marston) Cook.

Mrs. Walker was a 1917 graduate of Massachusetts General Hospital in Boston and member of the hospital's Nurses' Alumni. Association.

She had been a resident of Saranac Lake since 1919 and had owned a tuberculosis cure cottage at 67 Park Ave., and was later employed by Trudeau Sanatorium in Saranac Lake.

There will be no local services. A graveside service will be held at the Marston Cemetery in Orrington, Me.

Memorial donations may be made to Uihlein Mercy Center or the Saranac Lake Free Library.

The Fortune Funeral Home was in charge of arrangements.