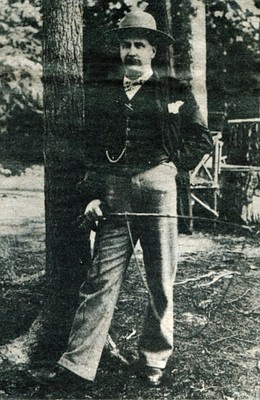 [George Meserve was] the undisputed monarch of all Adirondack stage coach drivers. A slightly exaggerated story of his prowess was circulated in that he could flick a fly off his lead horse's ear with his reins in his left and his whip in his right hand while at full gallup.

See Stagecoaches for the full article.

In 1886 when the D and H Railroad reached Loon Lake, Paul Smith's yellow coach drawn by six horses, white by day, black by night, met guests. Such legendary stage drivers as George Meserve were on the high driver's seat. It was George Meserve (he drove for Grover Cleveland at one time) who could flick a fly off his leader's ear from his coach seat and who, starting from a standstill in front of the hole, could have all six horses on the gallop before the coach had passed out of sight of the hotel.. Fastest driving time from Loon Lake by coach to Paul Smith's was one hour and 20 minutes!